So I am feeling MUCH better this week. Halleleujah!!!! The nausea and sore throat, coughing, cramps and general miserable-ness finally abated on Wednesday. Now I just randomly cough up horribleness and my nose runs, but hey, I’ll take it!

While my immune system was attacking me, I had a lot of time to feel awful and stew about it. That stewing made me take action- and I am making lots of appointments now to get on top of my health! 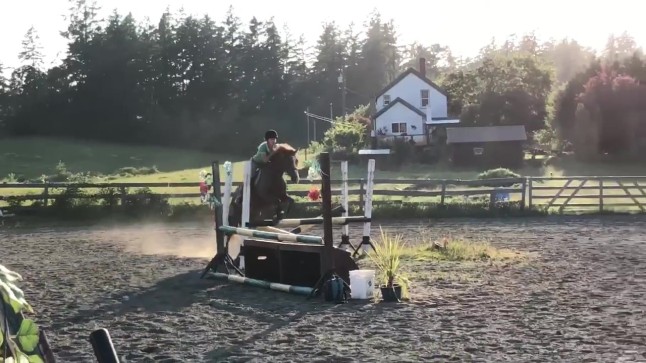 From last week, when I was actually riding worse, ha.

And my riding felt soooo much better last night- I had more energy, even though I protested about jumping the course for a third time and instead opted to just jump the 1 line and diagonal that I botched during my second round. Hey, baby steps right? We discovered that I am still riding quite defensively while on the slight ‘downhill’ leading to me kind of hunching with my shoulders, instead of wide open shoulders and elbows in, instead of chicken wings.

This affects my release and makes me feel defensive!

So, I’m writing this down to make sure the plan next week is ride a whole bunch of smaller fences…All going downhill. I am happy to say that I didn’t get left behind as much this week (phew!) and my brain didn’t fall out when we raised a few of the jumps (though they still looked small, ha. Why is that?!).

So, I am getting more comfortable with ‘riding’ my jumps and line in the outdoor but I have the occasional defensive hunch that happens when we are going downhill. I think practice and time will fix that, in fact I feel pretty confident that it will!

Oats was a good boy as always, even when the wind picked up and it got really grey and rainy out! I was SO OVER riding in the rain by that time hahaha and just wanted to be done! 😉

Nothing really gets him excited, haha.