I feel like a broken record when I say this, but wow my weekends are busy! Riding lesson on Friday night (and after feeling like total crap last week, I had to shoe-horn myself into my breeches and go anyways. Thank you buttons for your structural integrity!). I still felt pretty miserable…

But the lesson went well! We worked on introducing Oats to counter-canter signals, which was difficult but he was really trying, like a good boy. 🙂 Saturday more riding (we were in the field goofing off, it was soooo nice out) and then off to Victoria Beer Week’s Fresh to Death beer fest for the afternoon. It was great, and the weather was fantastic. 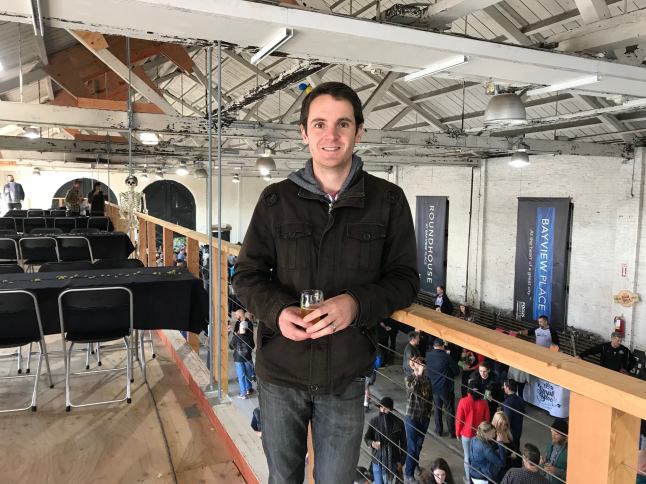 Fresh to Death- see our friend the Skeleton!

After the beer, we zipped off to The Flying Pig for some happy hour food (and I dropped my wallet on the floor and lost it there…) before heading home for quick R&R before going out to my friend’s birthday party. We were downtown at her party and didn’t get home until 1am! I was wiped! But it was an awesome day/night.

Sunday we got up and I tore the house apart trying to find my freaking wallet…Luckily the fine folks at The Flying Pig had found it, and messaged me on Facebook to tell me they had it! YESS!! We picked it up, went to the stables where I rode Oaty, and then we were off to the farm for Thanksgiving #1. Though it was pretty miserable weather, we had a super nice time with great food!

Home in the late evening, and I was up early-ish for an equine counselling session on Oats at the barn. It went well too, and then home again for lunch and preparing for Thanksgiving #2, at my parents. That went fine too, though felt quite long. The food was excellent!

And now, I am back at work. Can I get a weekend from my weekends?!!

Monday: Oats still sick, on antibiotics that I frantically called my vet to get him put on from Saturday. Beerfest is on! Pizza and Beer night with gelato. It was AMAZING!

Tuesday: Work is crazy, Oats is apparently still really sick? I start freaking out…Go out to the barn and jog him up and down the hill, and it looks pretty good. No snot, minor coughs in the barn.

Wednesday: Ride Oats finally!! After two weeks my legs are rusty hahaha. He has some coughs and snorts early in the ride, and it is insanely dusty in the ring. Like, I am coughing. So he’s doing quite well! Our first ride back in two weeks. After my ride on Wednesday, I head downtown for Beerfest Cheese and Beer night! It does NOT disappoint, unlike last year there are no crowds, the food is great and easily accessible and the beers are all my favs- Belgian Trippels, Belgians, and some sours and a fruit beer or two. YUM!

Thursday: Was going to try for my lesson but my trainer cancels this time! The dust in the arena aggravated a cough she had, and I can’t blame her. I go ride for my first ‘real’ ride and Oats is fantastic!! Coughing a bit, but it is so dusty that even I am coughing too, so I’m happy with the progress. Good boy 🙂 Also on Thursday: We go see The Dears at Capital Ballroom (formerly Sugar Nightclub). It was a sweeeet concert! Weirdly there was almost nobody there, so we got practically a private show- could buy drinks with no line-ups, and were right up at the front!

Phew. A busy, busy busy week. But, I’m just so happy that Oats is on the road to recovery. That was a long illness he had, and I was worried antibiotics weren’t helping- until they did, ha. I know I made the right decision to have him put on them, it had gone on long enough!

What does this weekend hold? Phew I dunno, I’m tired from the week!!

I went to two beer week events this week but thought I’d review the one last night for your reading pleasure: Beer, Cheese & more Beer

A fun, if extremely busy event at the Victoria Public Market. The beer token allotment is VERY generous (like 8 tokens?) it was definitely enough beer sampling for me.  Vendors brought their most interesting beers, heavily featuring ‘Bocks,’ German-smoked beer, some cask-aged beers, including a highlight by Daagerad- their 6-week ‘labour of love’ that I had two samples of!

And it wasn’t just cheese either, though some beer vendors had cheese displays on their tables, there were food vendors too. Victoria Pie Co, Very Good Butchers, a deli, etc. You could also get beer & cheese soup, a flatbread sample, vegan mac’n’cheeze (it was good, not great), samples from a deli (AMAZING), raclette with sausage, the sourest gherkins ever, so good! Olives stuffed with cheese, and vegan pizza rolls.

There were definitely crazy lineups for the food options- you could eat as much as you want but the catch is this- they run out FAST. And stop replenishing the cheese/most food options after only 1 hour! So yeah you have to move quick and prioritize.

I did try a very mild green(???) cheese from the deli, and Ian tried a cheese that looked innocuous- like cheddar, but that I heard one girl describe as ‘fish and peanut-butter’ hahah ew.

So go, it’s not too expensive for the fun options you get- (beer and food and it costs with tax per person about $31.50) but be ok with crowds and getting your beer elbowed a lot. It was such a busy and fun time that it made me forget that Ian and I saw a guy get hit by a car on our way there. That was actually really frightening, the guy got up and was ok – it was not a hit and run, the car stopped, etc. But still, jesus.

My lovely husband bought tickets to this ages ago, in December, for my Christmas present! I had been counting down the days to be able to go…And then it was yesterday!

For the uninformed, Beer Week has been going on for three years, I learned last night. It’s a week of educational and fun beer learning/drinking/eating events. Too many to list here, so here is the site to check it out: Victoria Beer Week March 4-12, 2016.

We went to the second seating at Prima Strada, a very fine pizza establishment. The name of the game? Pizza and beer pairings, the more unique, the better! I was HUNGRY too, having ridden Oats very quickly beforehand and zipped home to change…

We bought a beer while we were waiting for the festivities to begin. Seating is the long-table style of dining, which is pretty cool but always seems to end up with me going for a seat, and then the person next to it saying they were saving it for someone…Every time! Jeesh.

Anyways, there was a lot of ‘other’ seats available, so we had our choice. And even better, we ended up with brewery representatives at the table too, sitting across from us. They were super cool, and really pleasant.

Here is how it went down: Four beers from four different breweries, and four unusual pizza pairings. It started VERY strong, with a Townsite beer that was like 9%!! It took me ages to drink it, hahah. The pizza pairing was light, roasted root veggies with gremolata and mozzarella. I didn’t love this pizza. It was very ‘eh’…

The next one wowed me though- Driftwood beer paired with Thai-style coconut yogurt with basil pizza. SO GOOD! Yummmmm. I could eat/drink a lot of this one.

And then we had another amazing pizza- and bear with me, because I thought it sounded bizarro at first…Creamed brussel sprout pizza with very salty bacon? It was SO GOOD! It was paired with a surprisingly drinkable IPA from Yellow Dog Brewery. (I usually really hate the bitterness in IPAs so this one was a nice depart actually).

And it wrapped up with a beer that was a real showstopper- Category 12’s special cocoa nib/coffee stout. Wow. It was so dense and rich, and coffeelike, that I swear it kept me up at night! It was paired with a really cool pizza- pulled pork with red cabbage. I know, you’re thinking–red cabbage? On a pizza? But it totally worked.

A great event, we were wrapped up by 10pm and it started at 8pm. Now I can’t wait to try some other awesome Beer Week events!