To preface- my Garmin read this race as short, but I know they certify it, and I have had trouble with this area reading my Garmin correctly, soooo…But anyways, I got myself a shiny new personal best! Whoo!! 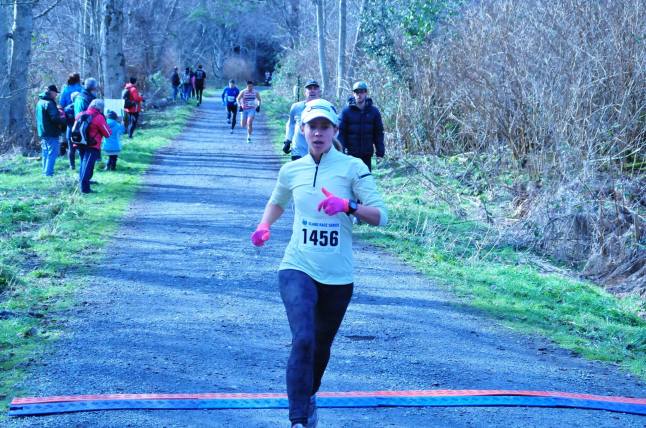 Best of all: A finish line photo where I don’t look stupid or exhausted! YAY! Photo courtesy of Joseph Camilleri.

After the ego-crushing of last race, the much-awaited Cobble Hill 10k, I was kind of not super feeling this one. I thought it was quite frankly going to be an ass-kicking of a race, and not a fast one for me. It is VERY hilly, notoriously so, and just…Not fast. Gravel, mud, some ice and snow leftover from our incredibly lousy February (which continues..), and you know the drill= run for conditions. And I did!

I didn’t tone down for this race because I had missed running due to all the snow and ice. Which, in my defense, I really enjoyed running again so at least it felt worthwhile? But between that, and my adventure on the Saturday with a lesson with Sam at Fairlawn, my legs/body were tired.

The morning of the race my legs felt tired walking upstairs. Greeeeeeat. Oh well! I got to the race nice and early, and it started snowing. Ahh..Shit. It was very cold, and I was dressed fairly conservatively, with long sleeved zip-up, long race tights and gloves. I was shivering at the start though! Yikes! This weirdly would change about midway through the race, when the sun came out and I got hot? Hah.

We were off though, and I tried to balance between going fast, and not burning myself out. Up and over the first hill and I was kind of stuck in a pack of people going slower than I wanted. ARgh! Down the hill and over the next hill, things started evening out a bit better. I played rabbit with a few runners, which was cool!

The hills weren’t feeling too bad, I think my legs were a bit used to them or at least they weren’t complaining too hard. I was seriously out of breath though, just gasping. I was annoyed, thinking it was my allergies but in retrospect, it was probably just because I was hauling ass and breathing hard.

I slipped, hard, a few times. Once on the snow and ice, and another time in the mud. I am not that agile and pretty clumsy, actually. However I didn’t fall! Yes! Victory!?

We were up and around the hill, and then pelting downhill for awhile. This was great, until there was more mud, and then it was scary. I was afraid of slipping again! I kind of skipped/slid over it and then we were on the flat gravel straightaway. It’s not that quick, but you can still make a good show of it. I did…Sort of.

I ran through the finish and done! A time of 35:36, for 5th in my age group and maybe 13th female finisher? And best of all, a minute faster than my time last year! 🙂 I wrapped up the day by chatting with a few other runners, and grabbing a hot dog and M&Ms. Yum! Thanks again to the VIRA organization, Frontrunners for hosting the race, and the volunteers who put up a brave front in the face of snow/ice and freezing temperatures and wind!

This weekend didn’t start off badly actually, it was only as we finished our race that I heard the terrible news of my friends family. 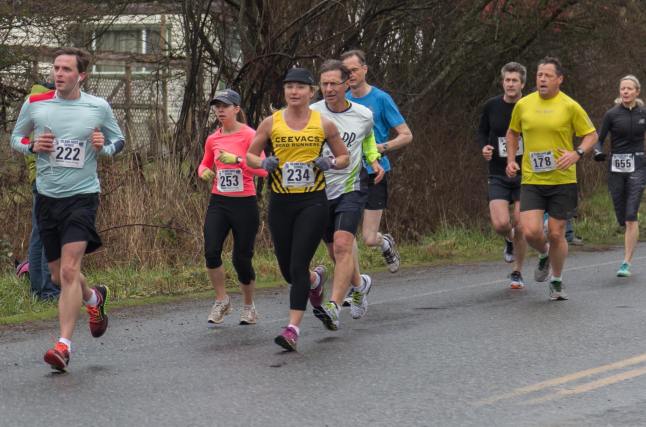 Photo courtesy of the Ceevacs. I swear I am running…

I have coverered that though, so this post will be about the race this weekend. Race #3 on the VIRA race schedule, of #7 total. This one took place in Cedar, a few hours away from Victoria. It was a 12k on ‘rolling hills’ and I had never run this one before, as last year we were in Hawaii that weekend (I would kill to do that again, actually…).

It is a smaller race, under 400 runners I believe. The organizers are super, clean up and bib pickup was SO fast. The race itself was…a challenge. The start was good, busy though and it led up a small hill. It was a fast field, and I was hoping to maintain at 4:45/km but secretly wanted to go a bit faster, so started off fast (4:33/km) and was trying to keep it under 4:45/km if I could.

Turns out I can, except on the way back where the big hill we trotted down suddenly became Mt. Everest on the way up… 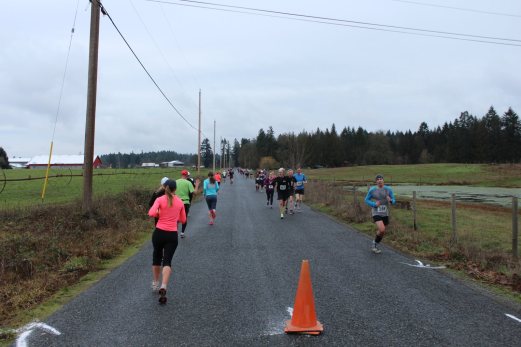 My breathing kind of sucked. I felt like I was struggling a bit (well at that pace, I am struggling in general) and then the hills…oh, the hills…just killed my pace. I went from a fairly reasonable and fluctuating 4:38-4:40 to a dead 5:15/km. Yeeeeesh.

And I didn’t really improve at the top, either! I just kind of ‘blahhhhed’ my way through the last 3kms.

Food was good, sadly there was a glitch and no Milk 2 Go protein drinks (that I love!!) but they said next year they will have some.

Triumphant striding to the finish!

The shortest, yet again…

Ran my first Island Series race yesterday and it went REALLY well. I didn’t have the highest hopes as I’ve never run an 8k before, only 10ks, and I wasn’t sure how my knee would hold up, or how I’d go (haven’t been training that much since I got back over Christmas) but as it turns out, I was quite pleased!

It was a bit chaotic to figure out what was going on, but we got our race numbers sorted out and were ready to go. I don’t have much of a warm up- that’s what my first 2kms usually are, so I didn’t stress about that too much.

The start was good, I felt a bit unfocused and airy-fairy, but kept relatively on track (probably at a slower pace than I should have in the beginning, but it felt doable and didn’t shock my system!) and then slowly started picking it up.

The 5k mark was a bit of a psychological twist- it went right past the finish line and looped around for another 3k, so I was SO WANTING to be done then, even though I wasn’t particularly tired- it just looked so tempting, seeing the finish line as we ran by…

Running up to 6k felt the longest, I think.

From 6-7k I really started motoring. From 7-8, I had NOTHING left. Saliva was flying out of my mouth, I couldn’t muster the energy to wipe it haha. All I could think (just before all thoughts left my head- was that I was FREE TO RUN!!!) And then I was just gasping for breath.

Finished with a 38:?? Didn’t catch the last bit because I was focused on running so hard!

Post-run had great snacks and protein milkshakes. A good and fun atmosphere, makes me really glad I signed up!

I’m actually sort of looking forward to my next run in two weeks- a 10k. My ultimate goal is to run an under 50 minute ten kilometres. We’ll see- so far I was on pace for that this weekend.

And a special thanks to my husband for actually racing with me, and helping me pace-set. I think it really helped me achieve what I was hoping for this race. Yeah!!