Yeahh….Much to my dismay, the Hatley Castle 8k was NOT AT ALL like the Sannich 8k I ran a month or so ago. Jesus, not at all. 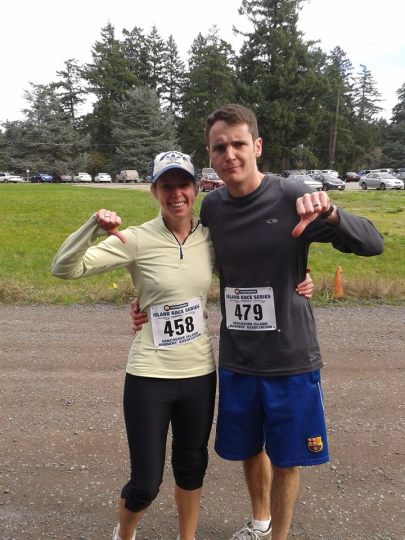 My race review: BOO!! It was HARD!

I had kind of a sinking feeling when my husband was like, oh yeah I don’t think it’s that hilly, maybe we should try to push for a more aggressive pace, and I was thinking, um, I’ve been a student on that campus and I remember it being VERY HILLY.

So, there’s that. The race organizer even had a special announcement- big hill at 2-3km so pace accordingly, doesn’t want anyone blowing their race early! My stomach, already fairly unhappy from my wine/cheese/salami/bread and Arkells concert the night before was even more unhappy with that announcement.

Any day is a good day to run

We set off, and I immediately fell behind my husband and friend. ARGH.

Started up to a hill after a very nice run along the water, and I started wondering if this was the hill he was mentioning. Nope! It was just a switchback, so we went back down it and then started running up another hill….Uh oh, now this is what he was talking about…

And it just kept going….

And never went down. It leveled out for a bit, and then UP UP UP! For approximately 6km…Even through the woods, which I would normally like! Except this time I felt like I was going to have a heart attack instead.

People were gasping, muttering and I heard rumours of a ‘big downhill’ coming. It was a long time coming, and when we finally got to it? It was not NICE, it was more like a 1km suicide run pell-mell headfirst down a gravel road. People went flying down the hill.

I had my knee doctor’s reminders echoing in my head- try not to race down hills, it’s tough on your knee, etc etc…I was slower going down that insane gravel run! GAH!

In short, we spent a good 6km running uphill, then 1km flying downhill, and then 1km flat running where I had no gas left in the tank. At all.

I straggled across the finish line gasping like a fish. I had saliva coated around my lips very attractively.

I would have rather run a 10k, that’s how rough this race was for me. EEEEEK!~

So, this is kind of an alarming day- if anyone follows the news, it’s frightening over in Ottawa, where I grew up and where my family still lives and works…

But the good news, is that they are fine and things are contained. I’m very glad.

To keep my mind off things, I thought I’d recap my lesson yesterday with Karen (good!) and also I made some tasty apple chips on the weekend with my mother in law’s dehydrator and they were great! 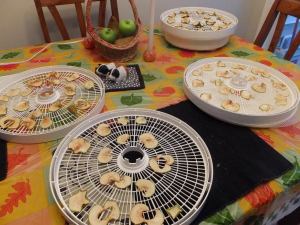 So the lesson yesterday- we worked on getting the bend and if it wasn’t working on the left, we switched gears and worked it on the right- switched to left- switched to right back and forth.

We then trotted a straight line through two cones (that got bumped and banged out of place SO MANY TIMES haha) and eventually worked up to leg-yielding left and then right, and then back to left and then back to right. We did this on both sides, and leg-yielded from both sides depending on what bend we had (inside bend- leg yield left, outside bend- leg yield right)/ It was good, we worked HARD!

We then worked on the exercise at the canter and I did feel anxious- he felt balky, felt like he wanted to do his prop-buck exercise- but we worked around it. So that was good! It just feels like when he gets tired and the right lead starts feeling like too much work, he goes WAY OVERBOARD in his reaction. Like, get off now! Instead of, this is tough! We also focused more on ‘letting him stretch’ his neck down at the canter instead of propping and getting high-headed and ready to launch- with some success.

And frankly it intimidates the heck out of me, how would you like getting bucked off?

But- we are working through it. It never escalated to that point yesterday, and Karen said we got some great leg yield work out of him, probably the best we’ve gotten yet!

So that part is indeed a work in progress. Sigh. Like all things in my life…