As I am far behind in my recaps…I did a jump lesson in the pouring rain on Thursday and I did it pretttttyyyy grudgingly- hello, it was pouring!!

Nicole however, insisted we do it to practice for the upcoming SSITS Avalon Derby Cross that we had signed up for and I guess she was right, we needed the experience jumping and toughing it out in all weathers, as it poured rain on our warm-up day Saturday at Avalon as well! Hm..good thing I had Thursday under my belt.

I was feeling weird before my lesson. Kind of angsty- thinking about the show, bummed about the weather, just kind of strange. We came down to the arena and Nicole was bundled up in a tarp like this:

Ha! And Oats, good pony, got a good look at her but then didn’t bat an eye when she was rustling around moving jumps, even when we were like behind her and the tarp was louder. Good pony! The jump course was the same as last week, which I was thankful for, as it gave us another opportunity to work on some aspects that kind of bungled for me–the turns, and forward, and bravery. 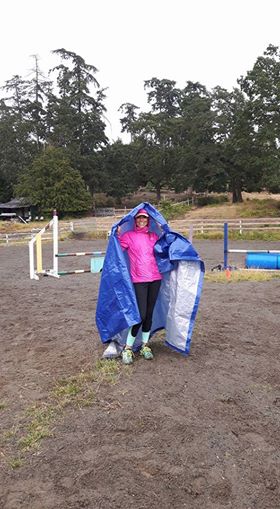 Not that I didn’t still make mistakes- in fact, the final jump (10) I bungled so we looped around and just jumped it on it’s own, and it rode really well! Also the jumps that had oxers went up to oxers- which did make me nervous, and they didn’t ride well for me- I kind of tried to chase Oats past his distance, so they were weirdly chippy.

I was much happier with most of tracks I chose, and we didn’t have any stops or anything. He was a good and honest pony in the pouring rain- I was soaked- and didn’t put a hoof wrong, even with a bunch of new stuff piled behind the indoor arena, his favorite spooky zone.

I did notice that I was much more comfortable with a closer stride and distance, and so was Oats, funny enough. It wasn’t lovely, but it was pretty darn good. Considering the strange nerves I had going in, I was pleased with the ride and looking forward (with more than a little trepidation) to my first-ever Derby Cross event on the weekend.

That recap is to come!