So I had my jump lesson on Saturday (like, real jumping, not dressage jumping) and it went pretty well! We worked over a small course, and the jumps were teeny-tiny, ha. I, on the other, hand, was feeling like total crap. We had gotten rudely woken up by movers wanting us to move our car so they could get into out neighbour’s house, which is fine, but they were here before 8am!

I had a terrible sinus headache, staggeringly bad allergies, and felt fuzzy, muzzy and really exhausted and weak all day. Great for a riding lesson eh? My head felt like an effing balloon. I couldn’t remember a damned thing and my head/sinuses were going to explode.

When I am doing this! How?

So yeah the lesson was fine, I just felt like absolute garbage for the entire day. I couldn’t wait to get home and sleep on the damned couch. Which I basically did as soon as I finished my lesson, ha. My allergies have taken over my damned life.

Also I am having trouble trying to get the right ‘feel’ from my Thursday lessons to translate to my jump lesson days on Saturday. I LOVE the feeling I have on Thursday, and then I get to Saturday and it feels… wimpy? I can’t get him off my leg, or get any connection. He breaks gait, slows to the fences, etc. Just not the same. How do I reconcile this?

Something to work on!

I feel extremely ambivalent about everything right now. I know some of the reasons (suffering from horrendous allergies, and now I am allergic to everything, so breathing isn’t really something I can take for granted right now. I started a new medication for endometriosis and I am hoping it freaking levels out soon, because this on top of allergies makes me feel like my body is under some sort of attack, constantly?!!). 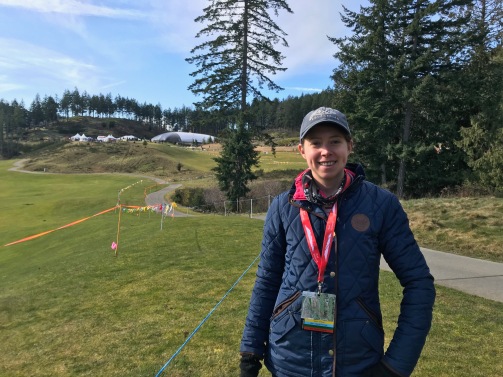 But also, just…Life ambivalent. I feel very sensitive to a lot of the bad stuff happening to my close friends and horse friends. I also am struggling with change, and trying to embrace it as a net positive, but…yeah. I also got approached to change my lesson times to the weekend, and at this point, it’s feeling like a hard no. I like having my weekends free, and my day-to-day is intensely scheduled, so having a free day is just…Mine. You get it? Add in the layers of feeling guilty about not being flexible, on top of my trainer’s father DYING last week, and just..UGh. Can I crawl out of my skin for a month or so, let me get some breathing room?

My counselor says I need a break. Like, a month break.

I know I can’t do that- my brain would probably melt or something. But at the heart of it, she’s right- I need some space, some time. For it (riding) to be easy, non competitive, non training. I feel like I have lost a bit of the ‘why’ and the drive, to be honest.

Even when I think about competing, and there are so many fun looking events?! But I just feel…Blahhhhh about it right now. So blah. Maybe it’s my allergies talking, but yeah. I can’t get excited, I don’t want to move lesson, I just don’t want to do anything!!

Oats has been good, though our lesson on Friday was outright bad. He bucked, he was pissy, he was angry and tearing around like a deranged llama. Greeeat.. My trainer is newish to us, and said she had never seen him like that before?! Ha. Yeah it has been awhile!

He was fine this weekend though, and my husband and I went up to volunteer at Bear Mountain’s XC Pan Am cup challenge, and it was very neat! A quick ride after, and then I had my friends over for a really fun dinner – fondue!

So like things are fine, but I’m just not feeling it.  At all.

Ah, Easter long weekend and boy did it go FAST! I rode (lots!!) to Oats’ chagrin, haha. Did a lot of running (with a friend and a trail run with Ian), enjoyed a lovely Easter dinner with my in-laws and generally just enjoyed myself, my company, my animals and the weather. 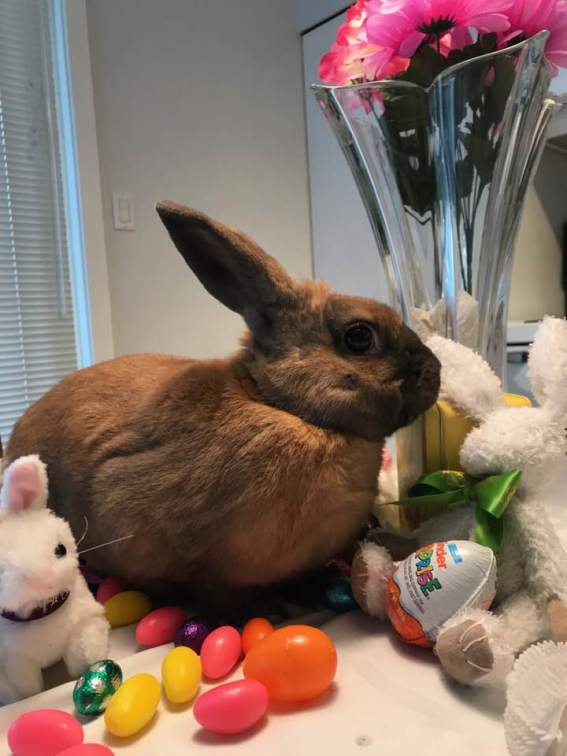 I also ate a LOT of chocolate…Yum. No regrets!

And I did a traditional Easter photo-shoot with Gidget and Tucker. They were absolute chaos to wrangle, hahah.

And struggled greatly with terrible allergies. My sinuses felt like they were being drilled from the inside-out. UGHHHH wtf is with these allergies??? I am suffering! Plus this week is very busy, with double riding lessons, work is busy, horse show on Saturday and the TC 10k on Sunday. Busy busy busy!

Better buckle down, me!

Wow, so like a week of silence… Life got too busy, work kind of blew up in my face and I couldn’t deal with 1 more thing, at all for the past two weeks. I am hopefully coming out the other end of it, but yeahhh… Not fun. At all.

Also my allergies went completely off the rails and friends, I am suffering. Congested, incredible sinus pain, itchy upper palate, allergic coughing, eyes swelling shut and so itchy that I can’t even deal…Oh boy, I love it. Add this to work and I spent most of the week absolutely miserable.

But there is also the good: Weather! We had a crazy turnaround and had highs of 19-20 degrees this week. It felt incredible and sadly we are back to seasonal (still pretty decent) but on Wednesday it was downright HOT! Woah! I loved it. 🙂

I went to the beach- 20 degrees, can you believe it?

Horses! Oats has been a total superstar!! Love my boy. We had a gymnastics jump lesson last Thursday (I hate gymnastics, so it was …Not that inspired, ha.) and then we had a really fun jump course on Saturday, with all sorts of crazy jumps! Not high, but definitely getting more consistent at the 2’6” -ish level heights. We also had a cavaletti jump at ‘A’ that really caught us out a few times, as well as a 1-ft circle jump that I biffed HARD by staring at it, hahaha. It was fun though!!

Got myself a latte at a new coffee shop nearby: Pretty eh?

Sunday I went on a run with a work friend, and then went riding later. Oats has been really good, although I’m noticing his ‘halt’ has turned back into ‘halt and then start flying backwards…’ so we’re working through that this week. Lovely…It’s not a new issue for us, it crops up about once or twice a year, but kind of always bugs me. Oh horses!

This week was totally psycho with work, and by Thursday I was Over.IT. and tired. So tired. I didn’t really want to go have a jump lesson, but I know that when I go, I’m happier. More ‘me’ if that makes sense? So off I went! My allergies were a bit better yesterday, I still can’t wear eye makeup but yeah anyways. My jump lesson was really good! We worked over a small course, with the rocks as a single jump down the centre-line. Hahahha it was hilarious, Oats deked out and went around it the first time, crushing the traffic cone that was designed to guide us. HAHAH silly pony!

We had a blast! He was jumping really well by the end (he did get a bit flat at first, and kind of ‘blahhhhed’ over the first jump) but we had fun and it felt good later! He also kind of tried to half-jump over the rocks and jump off to the side. Oh pony. He’s such a good boy though, and it was a cool and fun lesson. See? I always do feel glad that I went and jumped, even though I spent my week feeling itchy, miserable, tired and stressed out.

My boy is always there for me. 🙂

I feel like right now I am just a big ball of suffering. I am having a lot of trouble breathing, my ears are irritated (my ears people?!) and I am coughing constantly, constant post-nasal drip, running nose and sinus headache from hell. 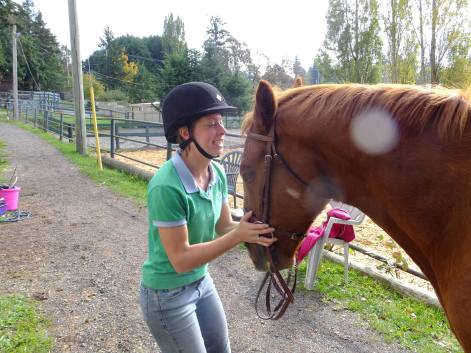 Sometimes, I hate you!

I’m not sure exactly why my seasonal (year-round seasonal…) allergies are going completely psycho but I am having a SUPER hard time dealing right now. Suffer suffer suffer…I take two Reactine pills and they turn me into a balloon-headed zombie, and the steroids I also take DO NOTHING. Woe is me.

I rode yesterday (hence the WW III reference) and then came home and slept for 2 hours. WTF…

Oh and the riding. Well! Saturday Oats was super good, a bit pokey but generally had his game face on. We schooled some small x-rails to show off for my coworker’s husband and kids who came to say hi to Oats. It was cute, he was well behaved and a fun pony. A good time was had by all.

I was going to gallop in the field for a bit, but the wind started getting really nuts, my allergies were starting to get out of control and I was just.not.feeling.it.

The horses were kind of dingbats anyways, so I headed to the indoor to do some homework: read, lateral work, not the fun gallop Oats would have preferred. And he warmed up nicely, canter is still kind of a lousy work in progress, trot was good and his walk-lateral work off my left leg was lovely!

The right was HORRIBLE.

A battle. Like, a real struggle. I was pretty determined to not let him bully me, or scare me off, or get me frustrated, so I kept at it. He pulled every game out of his nasty bag of tricks- running backwards, throwing his head up and down, gnashing at the bit, yanking the reins out of my hands, running into the wall, hopping up and down, threatening to rear…

I was talking to him the whole time, and I called him every name in the book, but was gently, consistently, persistently keeping at it.

I did not give up. I did not get mad and let him unfocus me.

It was going to take as long as it took, and boy, it really did. I was so done, but I also realized that in this little tempest in a teapot, if I let him get away with being a shit about this, next time I’d have double the effort to being a shit.

So, he banged his head against the wall, threw his head dramatically around, ran backwards into a jump standard, and was generally committed to being a giant dickhead.

All, rather than give in to my right leg pressure.

The ride that could have been short ended up being VERY long indeed. I was tired, pissed off and like…Really? This again?

When he (extremely grudgingly) gave me a few NICE steps over from my right leg, I went straight and let him stretch down long and low. He immediately snatched the reins and dramatically went to stretch but I let him go.

The whole ride took soooooooooooo long, but in the end, I was the one who won that day.

I hope Oats remembers it! I have no desire to repeat that little drama-rama.

And then as I said before, hopped up on too much allergy meds (which may actually have explained why I was able to zen my way though that miserable episode) I came home and slept for 2 hours in the middle of the afternoon…