I’d like to bring in a word here that everyone knows but probably didn’t know the original meaning until I heard it on iZombie last night…Egregious.

But apparently it also used to mean awesome but terrible at the same time. So, going with that, I am going to use that term as it was originally planned to describe mine and my husband’s first half marathon of the season.

The bad: My husband did this while racing with a knee injury (terrible idea!) and was basically “Terry Foxing” it around the course the whole time. Eeek…It started when we were at 4k and we were feeling really good, and then he said his knee was going. But then he kept going?!! I kept saying he should step off the course, and why didn’t he, but then he said I would probably keep going too…So yeah he did it, but it wasn’t wonderful.

Also kind of bad: At the risk of too TMI- I have terrible stomach issues before racing, and thus went into this race feeling way under-fueled. I can get away with this for shorter distances but for the half it just about killed me. Such a bad idea, and I need to get it under control before my next race. I’ve let it go on wayyyy too long.

The race: The weather was actually super nice, chilly but not freezing, and most importantly– NOT raining! That would have put the literal damper on our already somewhat difficult day (pun intended).

It’s not a super hard course, but it does have a few hills that make life kind of miserable. They feel ok on the way up, then at the turnaround you start really questioning your will to live, and then you riiiiiide down the hills, feeling great! And then back up the smallest hill, and you die.

The track out was awesome. I was feeling good (despite actually being hungry going in due to my angry stomach), we were well on pace, ahead of it actually, turns out we would need that buffer zone, and rolling.

4k and my husband’s knee went funny, and up to the turnaround, 10k, started losing a bit of our happy place. We got passed a LOT on the way back (WTF??) which is not something I am used to having, and boy when you are suffering, it does crush the spirit more than a little!

We were kind of limping along, I was determinedly staring at the yellow line on the road in some sort of pain-zen state…We lost time a lot, and at 18k I definitely hit the wall. It felt like I was running uphill through a pool.

I know now that I was under-fueled and super dehydrated. I had sweat out EVERYTHING and was really struggling. My husband was not doing better, as he was behind me limping it out. I think if I see the photos I will laugh and cry about them! Man!

I managed to weakly ‘sprint’ past someone at the finish because I needed something to win on, and then immediately felt like I was going to faint. My vision started greying and getting blurry and I was staggering around shouting for my husband. Yuck, even thinking about it today makes me feel kind of sick.

That, friends, is how NOT to run a half-marathon. This is my weakest distance (next to the 5k) and it really showed me how unprepared I was, even though I felt like I was good for it. NOPE!

The food after was soooo good, lots of it, and the volunteers were great! Yummy chili, cheese, buns, cookies, chocolate milk and yogurt. I couldn’t eat a lot, felt pretty gross for awhile, but did manage to eat the yummy chili!

And that race taught me something very valuable- don’t get cocky. Respect the distance.

Yes I can’t believe we are already on race #4 of the VIRA series…time is flying by! I did not have high expectations for myself for this race, as last year it really took a lot out of me and I found it quite …rough.

See pic below from last year:

This year, I was prepared though! I had done a lot more hill running, so I had a better idea of what to prepare for, and I’d already done it once before. Still, I didn’t really have a time goal other than ‘better than last year’. I was running alone, as my husband and friend weren’t running this year with me, but luckily my husband was there to take some photos- yesss!

This year: still a struggle

At the start, I was kind of mentally kicking myself- I was absolutely frozen, I also seem to have some recurring stomach unpleasantness that I’m sure is related to the anxiety of racing as it seems to crop up often when I have a race, and I was just feeling…blah. I also think the beers the night before may not have been the best idea, but I guess you learn that the hard way.

The start was quite jammed, and I didn’t get up as close as I should have. We flew past the start (it is a downhill start) and I was immediately stuck behind slower runners, almost clipping their heels, yikes! I did a lot of dodging and weaving for the first km and had to rush to make it up. I was slower than I wanted to get to the first hill, having placed myself incorrectly at the start (again!).

Once having broken out of the pack, I played a bit of leapfrog with a younger racer who I recognized from my MEC 10k race earlier this year (she beat me, and she beat me in this race too. arghhh) and an older gentleman who I passed and stayed past!

The hills didn’t feel tooooo bad, but what I seriously lacked was a good recovery past the hill push. I just didn’t have that ‘oomph’ past the hills…It’s like I got to the hills and was like, phew that’s over! Oh, wait…

There’s the whole rest of the race! Surprisingly the portion in the woods was nice- springy, I was getting good foot feedback from the soft ground. It was still uphill but not terrible. It was very dark though, almost hard to see. There was a coach lurking in the woods cheering us on- yay for this dude! It was awesome.

Dying at the finish part 1

The long downhills were soooo welcomed! I even managed to run them without too much fear–I guess doing those crazy GutBuster runs and MEC runs have made me much braver. I was getting tired though, and once the downhills ended and the flats began, I was so done. 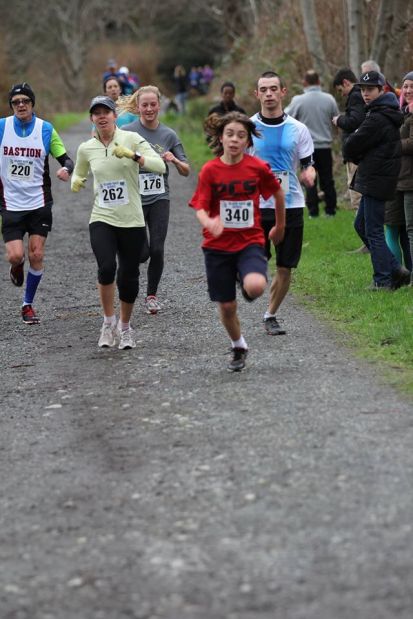 Photo by Brian Domney and a great shot of me getting blasted past at the finish..haha.

Dying at the finish part 2

I kind of struggled to the finish, looking like I was going to puke. Lovely. I got beat by a 12-year old I think? Kid had a crazy rally to the finish, better than mine that’s for darn sure!

The spread at the end of the day was SO good! Hotdogs, an apple fritter, and all the candies you could hopefully want! Yogurts too! Yum!!

Photo by Brian Domney: Where I am literally a head shorter than the others. Looks pretty funny!