I was grouching about fall yesterday when I showed up for my lesson and was feeling cold, the sky was blah and grey and it got dark during our lesson. Wahhh summer is ending… 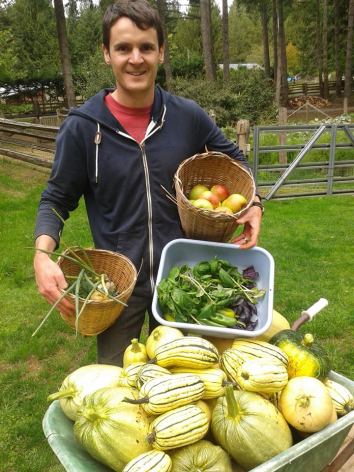 I don’t hate all of fall though. A big part of our fall family tradition is helping harvest at the farm (read, picking everything at my in-laws farm).

Over the past few weekends, we have picked:

It’s crazy, isn’t it! I love fall harvest season. It’s a true joy to be able to pick and enjoy this much from their farm. The only thing I don’t like is the number of spiders in the trees and in the squash plants, and also I pulled down an apple and a bunch of earwigs flew out of it…onto my head. EEEEEK.

A wheelbarrow full of random squashes.

So, one good use for fall- harvest ALL the things!!

Friday night: Had a great (and mostly free!!) time at Lighthouse Brewery’s open house BBQ- got tix for a free beer and a burger, and the rest of the beers were $4…So no reason not to have more, haha. AND their new rhubarb beer is amazing, I had it twice. Good food, good beer and good friends- who could want more?

I even won a door prize- $10 to Hanks BBQ joint downtown. Hilarious eh? I did question if it was real…

Saturday: Woke up feeling less than spectacular. Apparently more beers don’t really agree with me anymore, particularly when I have a jumping lesson! I felt so draggy and tired and out of it. Lucky for me, Oats brought his A-game and was a star! We worked on the gymnastic line (not set high though, prob only to 2’4” or 2’6” ish) and then added on to the course, which I wanted to bail after once because, hello, tired…But then took a break and did it again, even better! Go us!

Sunday: Rode Oats in the morning and he was good! We did a fair amount of cantering, circles, large, more circles, and I was quite pleased with him. I then jogged downtown with my husband to go watch our friend in his dragonboat race- we missed the race but managed to catch up with him later, so that was a win! We even got some free pizza slices courtesy of Dr. Oetker’s travelling van, and it was sooo good. Wrapped up the afternoon by running out to Songhees and back, and then home…And my knee didn’t make it.

I couldn’t run anymore, and we ended up having to walk home. I could feel pressure building under my kneecap and my kneecap was shifting too much and it hurt quite a bit. ARGH. Setbacks…

I hope it is temporary! I iced my knee at home, and worked through my exercises. I have also made another appt. to talk about it with my knee doctor.

We then headed out to pick some blackberries and it was significantly less joyous than it has been- the blackberries seemed to be out for blood! And they were either overripe or red on one side. Gah!

But, we finished the day with a lovely dinner, and I really enjoyed my weekend of not blasting off to another race or travelling to anywhere. Sometimes you just need a weekend at home, I guess!