Yes that’s right, the day after we flew back from Mexico (got into town at 11 p.m. on Saturday) we were up and ready to head to Sooke to race a 10k! We did plan it this way, because the VIRA races don’t start until 11 a.m., thank god. Even then, we had a pretty tiring journey home, complete with ‘planes, trains and automobiles’ type of mad, harried scramble, so I was pretty exhausted. 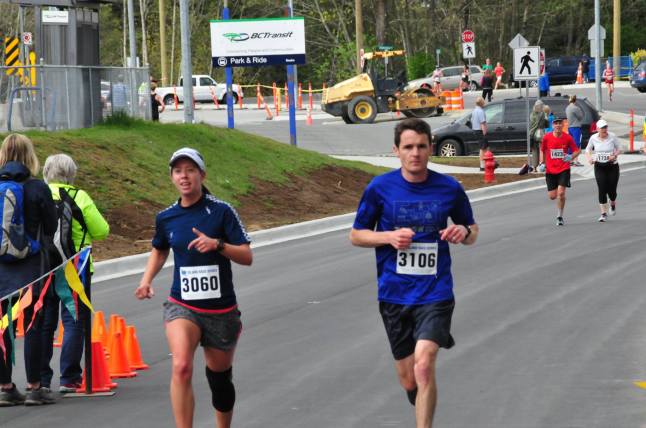 But we got up around 9 a.m. and trekked out to the race! I didn’t have real expectations- Sooke is a rolling, hilly course and I think my best time on the course was last year, with a 44:?? Can’t quite remember what but something like that. I had my watch but it was dead, haha. So, it was freewheeling!

And I have to say, there’s something to that freewheeling. I ran by feel, started pretty quick, slowed a bit on rolling hills, played rabbit with a few other obliging runners (I passed them, then they passed me, and then I passed them again), shouted encouragement to a friend in my age-group who was running well, and just kept going.

My husband ran with me, he hurt his foot in the half-marathon so had to take it easy= running with me.

We hit the turnaround and I was still feeling pretty darn good, considering I was tired and my legs felt like freaking jell-o when I got up that morning! I cruised on, and my breathing started getting a touch more labored. I fought the urge to check my (dead) watch… We hit some more rolling hills, with a steeper incline between 7-8km that really killed my pace, BUT I still had some zip in my legs!

There was a bit of a headwind, but nothing terrible as we rounded 8km-9km…Homestretch here we go! I was feeling pretty confident! Best of all, my husband was able to cross the finish line with me 🙂 and I didn’t get passed at the finish chute, sometimes that happens and it is a killer, haha.

I finished with a time of 43:17, which seemed unusually fast for me, I thought the clock said 43:30 or something, maybe even 44:00- my eyesight is not great. Many thanks to the fine volunteers who kept us safe on-course on a very busy day and road. Great turnout too, and I was third in my age group 🙂 And I’m not going to complain but rather comment that the snacks selection was a tad limited and emptied out really quickly, unfortunately! The first race I have been to that had that happen. There were some really good power-balls but again, went fast.