Hmmm words to live by?

A rough night last night with my dear doggy scratching herself silly…She definitely has fleas right now. GAH. Time to get on treating her! It kept me up.all.night. Bad for her, bad for me.

After an exceedingly grouchy morning, I’m ready to digest on my ride last night- I wanted to keep it fairly relaxing, as we had a challenging dressage lesson the day before. I had cancelled my jump lesson last night (there are five Wednesdays in Nov., and I only wanted to pay for four lessons because I am basically hemorrhaging money on horses every day…).

And it felt like the right decision, you know? He was fun to ride last night, and I worked on a few small items, lightly. We did some distance work on poles, and borrowing briefly from my jump lesson last week, when we did collected canter raised-pole work, I collected his canter in to one pole, and let it play out for the next.

I really liked how he approached the pole with the collected canter, though it was difficult to get/keep that canter. He popped up, and round, rather than big and flat as per his usual canter.

Now, to work this engaged canter into our normal jump routine…Hmmm….

Oh and the weather was god-awful- sooo glad we have our indoor arena! It was pouring rain, and freezing cold. BRrr….Our rainy but mild November is officially over.

Had my jump lesson last night, and we even took advantage of the tiniest bit of light left in the day to hold it in the outdoor arena- lucky eh? 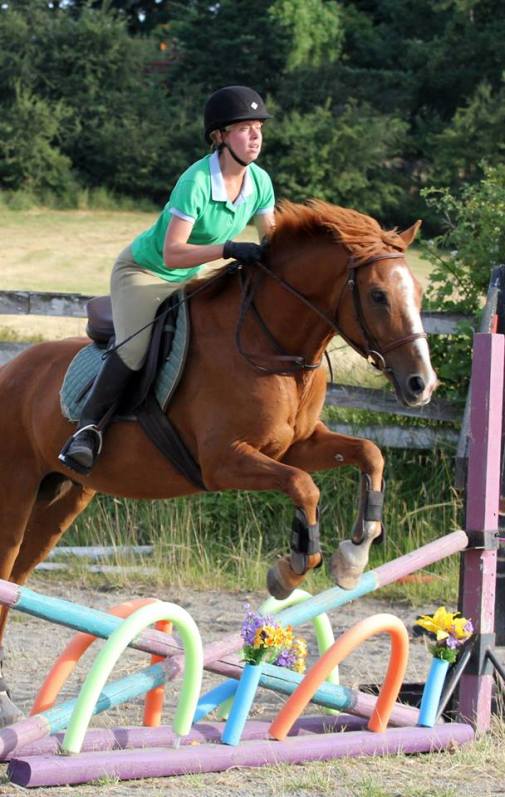 Jumping can be fun!

I borrowed my trainer’s saddle, she had generously lent it to me for my lesson and we checked the fit- and so far, so good at least until my saddle gets fixed (no word on that yet, how many times should I be calling the saddler until he comes out to my barn?!! I am at twice so far…argh).

We worked on quite a technical exercise–canter-in gymnastic, starting with a small x-rail, to a series of (6?) poles at 10-ft canter strides, working our way up to a small vertical to a half- x-rail bounce.

It was definitely a mind-challenge!

The raised poles made every stride matter. I had to come in with a ‘very’ close, collected canter rather than letting Oats go SPLAT through the series of raised poles. We did have a few rounds that he kind of slammed through them, until I learned that at the first pole before the x-rail, I had to be holding him in, and keeping him very tightly between leg and hand…Rather than just pushing him over the gymnastic and leg leg leg, which is what I am used to doing.

It was very educational, and I feel like I learned a ton from it.

I hope Oats did too!

We ended by going through the gymnastic-canter pole, and then circling and heading through 1 line set up on the other side of the arena. The goal was to get five strides. We sure didn’t…The first go-around we jumped in well, and then…wha?? He got 6 strides and stopped and painstakingly climbed over the last fence. Eeeegh!

Time to go around again! This time, we nailed those strides. It almost felt like Oats was surprised by the jump? Haha oh well, at least he jumped it?

Good pony, and a good lesson.

Saw this as a song title on the weekend and it resonated with me! And it kind of reflects how I feel/felt yesterday–it was a rough day at work, I felt harried, busy, put-upon and stressed. When I came home, it didn’t really lift. I was super tired, my legs have been sort of achy (not like how they were on Friday, just…blah), and when I went to ride, it was pretty lousy haha.

I set up a pole, and when I went to grab the pole, it CLANGED off the wall and the reverberations sent literal shockwaves through my body. It HURT! Ouch. So, setting the scene for a great ride, obviously.

Except I was riding like an idiot–who knew cantering over a pole could be so risky? I got tossed to-and-fro, got left behind the motion, couldn’t figure out my turns, I swear at one point, I was on poor Oats’ neck! Yuck!

We took every single long spot you could take, and wow…I was riding like a total dummy. Hmm…that was a long spot and I got left behind and tossed in the saddle. So, next go-around, same thing, right? Yeah, and the same darn thing happened! Yeeeeesh.

I ended up jumping the green box (our prior nemesis) instead of just the pole and wonder of wonders, it was easier. Not prettier, or even necessarily better (I’m looking at you, hand that likes to crank Oats to the left in the circle…) and one time we ended up practically under it, but Oats is a cheerful and forgiving chap, and hopped neatly over.

Nevermind his rider, who has no clue what was going on that day!

I ended with heartily getting left behind from a trot over an x-rail (told you this was my day to shine!!!) and called it quits. Clearly, no Nobel prizes are going to be won with my riding in this moment.

My fabulous ride capitulated with the following:

I had to edit this to add one more thing: Your home work assignment; drink a glass of congnac in a bathtub. Love it!
And Oats has been a good pony, he was spooky last night due to a crazy windstorm. We worked again on maintaining straightness/rhythm over a course of poles. We event went for a pretty crazy bending-line that my coach recommended against–haha! Yes we can do it!