I hate Mother’s Day. Hate it. I do not have a great relationship with my family for a variety of reasons, and also it just…Sucks. It is performative and angsty and I have little tolerance now for the demands ($$$$$) my mother likes to place on us for her birthday, M-Day, Xmas anyways…Just hate it.

So what do you do when you hate that day? Make it better, and make it your own 🙂

We had our own fun day and it did help relieve some of that existential pressure I felt seeing everyone with happier families and sincerity that I do not have. Ian came with me to the barn and helped me do a jump school! I haven’t done one on my own yet since he has recovered from his injury, so it felt pretty big to me, yay! Plus we have to miss our regularly scheduled Tuesday lesson because Oats has a dentist appointment, so I wanted to do a little something on our spare time, to keep sharp.

Oats was a star, a good boy and the bestest pony. Nothing fancy, just hopping over a few fences and calling it a day. Nothing better, I think!

We then took our dog out for a walk to the water, and then swung by Moon Under Water brewery for a beer on the patio. I was FREEZING. Ha. Not patio weather here, basically ever?

We then headed home and had lunch and then went to play some kick-around soccer at the park. We both failed miserably at ball juggling hahaha and it got frustrating so we gave it up and played goalie instead. My husband said he admires the fact that I am not afraid to hammer the ball home from 1 ft away…Not really intentional, I swear it!

It’s a nice way to make what is traditionally a miserable, pressure/stressful day for me even better. Plus it makes you feel happier going into the (extremely busy) work week! 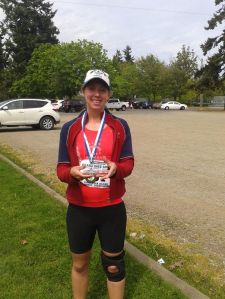 Not a personal best, but a good day nonetheless!

They are so much cheaper (entry fees are typically $20-25 in advance, maybe $35 day-of), the food is good – better than what we normally have at the TC10k – and the volunteers are awesome! 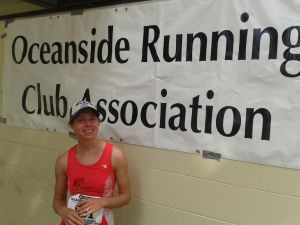 And at the finish, they gave you a carnation and a bottle of water! Lovely.

I had mentioned at my last race (Sooke 10k) that while I was lucky enough to finally place, I had also won a draw prize for another 10k race- the Oceanside Mother’s Day 10k. So, even though my last 10k was kind of a killer and I was swearing up and down I was going to take a break…I was now signed up for another one! Silly me.

My husband ran with me, and the course was really nice. Good variety of terrain and not too technical, we ran across a small bridge, down a hill to Rathtrevor Park, and out to the ocean, and we ran along the ocean for a bit on gravel, and then back through the park. I think this run had some of the loveliest scenery, and probably the most race-marshals marking the route haha. We really enjoyed the slight breeze off the ocean, and the hilarious stares of campers going ‘WTF’ are these people running like idiots through the campsites!!

On course in Parksville- Photo courtesy of Terry Riggs

It was cool in the trees, and overall not a warmer day, which worked to our advantage.

It would have been an excellent race to try for a personal best, but for some reason I just wasn’t 100%- I was struggling to rate my breaths, and I felt like I was gasping a lot more than I should have been. I have been trying to start out faster, and then work to try and hold my pace for longer (like 5k or so) but I started dropping faster and by 6k I was like ARGHH…I’m dying….

Way far back you can see us! Photo courtesy of Terry Riggs.

BUT everyone else was a bit slower- soooo I got the happy cheers of volunteers shouting to me that I was the second woman!! Yeah! That has NEVER happened to me, as I am still  fairly new at racing, having started just this year.

So, we kept pushing forward. I lagged bigtime at 6-7k, got a big ego boost from the volunteers and went through to 8- struggled up the very short hill, and then held fairly strong from 9 to the finish. No sprint at the finish, but I did feel like it was a good pace, and one we held well for the last kilometer.

We finished at 47:25, which was slower than my last 10k time (I know I can’t get PB’s every time I’m out…) but good enough to place me as the 2nd woman overall, and 1st in my age group! Yeehaw!!! I do have to note though that this race was far less competitive (a fun run) than the ones I have run overall this year- that is certainly why I placed where I did, NOT because I have somehow inexplicably become a super-runner.

Thanks, as always, to the lovely folks who take time to organize, volunteers and run in these races- I’m learning so much at each one, and enjoying the challenge.