I feel like I held it together really well this week, up until oh…Thursday? Then, everything kind of broke loose and I had what felt like a slow-moving meltdown. I guess I’m glad it took until Thursday?

Last weekend was pretty beautiful and not that cold!

Our first full week and work was BANANAS. Events every single day (and into next week too, natch!), my trainer received some really terrible news and had to cancel jump lessons last night (probably good, because I was in a truly horrible mood), my mother decided to make an issue of me not attending a cousin’s wedding (in Feb, in the middle of nowwhere, and by the way I’m not close to them, though they are lovely people), I hadn’t gotten paid yet for Oat’s lease, and when I got to the barn, my jump crop was missing, and when I got home, I ripped the mailbox off the side of my house. LOVELY.

I really liked the festival of lights!

Anyways, I brought this awful mood to Oats in my warm-up, something that I am not happy with myself about, but the good news is that my friends were doing some jump schooling anyways and I did a few jumps and YES that always improves my mood!! Oats was a star and good boy as always 🙂 and the funniest part was when we were cooling out, I dropped the reins and let him go on ‘pony cruise control’ following his friend horse. It was so funny! It definitely improved my mood. What a little sweetheart… 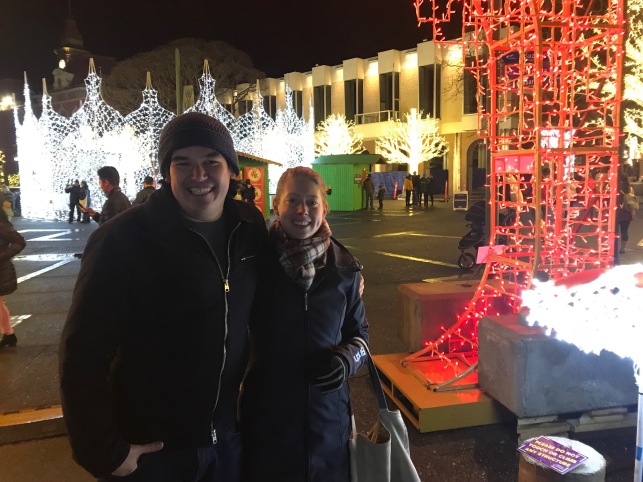 We are also facing a real bout of nasty winter weather, with wind gusts this AM up to 80 km/hr, snow?? and rain. So far just rain and it’s not cold enough to snow here, but yeahh…Next week is looking VERY ugly- a high of -2? In Victoria?? Noooo! But I won’t get too angsty. 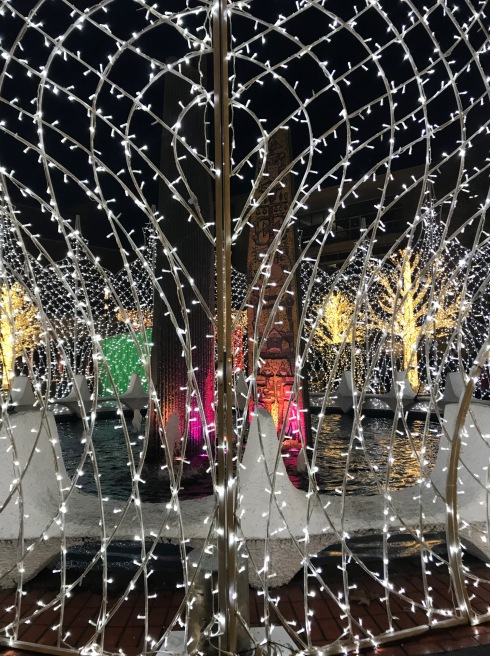 I did have friends to hear me out about the work/family situation, which I really appreciate. God, some people just get under your skin, and stay there like a piece of glass! Mostly family! Ha.

Dressage lesson tonight- and I hope Oats feels a little more flexible through his neck, but I’m not holding my breath- we will see what horse we get on the day, right?

So…After my exciting, energy draining weekend I was looking forward to settling down and working on some good stuff (like, not falling off jumping is a big one that I am apparently incapable of doing right now…).

And I had a great ride on Tuesday- no lesson, just cruising around in the field. Oats felt great, I was chill, everything was nice. I had some high hopes for my lesson on Wednesday, looking forward to it and feeling like generally, everything is pretty fine. I spent the day loving photos of Oats from the Derby and feeling pretty much on top of the world!

I came into my lesson not feeling angsty, or strange or stressed or anything…And then it became immediately clear that this was NOT my day, or Oats’. He started off spooky, looking at everything and ‘startling’ constantly. I don’t do well when he is like this- it sets me off in a really BIG way- and I started having trouble managing the situation. We warmed up okay nevertheless, and he kept startling and being spooky and looky. Sadly, this only got worse as we continued on…

It started pissing me off, more and more. We went to work over trot poles to eventually build a gymnastic (not something new in our world, pretty ho-hum) and Oats COULD NOT GET HIS SHIT TOGETHER. He trotted, fumbled, tripped, stumbled, fell and just fucked around, adding in some startles that literally set my teeth on edge.

I couldn’t manage. Like, I was riding and shouting ”I HATE this horse.” UGh.

Normally, when he’s like this, we can deal and get through it. But this time? Oh, no.

We slowly worked our way to a small x- rail to another x-rail, and Oats bizarrely managed to trip on the last pole, catch it hard between his hind hoofies, almost fall and sting himself so badly with this weirdness that he was limping?!!!!

I was ready to jump off- I was worried he’d really hurt himself! But Nicole convinced me to keep walking him out and eventually he worked out of it. He was just surprised. Still, wow, WTF is going on with me/my horse? I just was crying in disbelief.

So, back to the drawing board.

He trotted out okay, and then we went back to poles. Poles are ok. Then, the small x-rail…That was ok too. Then add in another x-rail, to a small vertical. The wheels immediately fell off again- Oats stumbled, tripped into the vertical, and my whole arm went through the reins. EFFFFF!!

I lost my shit. I yanked him up,  and burst into tears.

I was in the middle of probably the biggest horse-related meltdown I’ve had since…Oh, maybe a really bad dressage lesson last year, when I got off and cried?

Weird, so weird. I just couldn’t cope, or manage the situation with Oats at all. I wanted to yell, shout, scream, cry and just freak out. We ended up walking, walking, walking and breathing. Oats seemed not fazed at all, but wow, I was. In a big way.

Finally, when I was able to calm down and manage my emotions, we cantered over a few small x-rails, which were totally fine and rode great. He was still looky as hell, but it was ok.

I cried a bit later, telling my friend about the ride. And then when I dismounted and was walking Oats through the gate, I went to latch it and he spooked so hard he almost fell into the gate. WTF? He is not a spooky horse…So yeah, not sure what was going on with him yesterday, but whatever it was, it sucked out loud.

…Every year the same struggle for old Mr. Oats. Him, versus the haying machines!

It started Saturday, innocently enough. Haying out in the field, and he was eagle-eyed watching the process (and all the horses were running like insane lunatics and I had to get help from Nicole to get Oats out of the field so I didn’t get stomped in the process. Fun fun…).

He was fine to ride in the indoor, and I took Sunday off to run the half marathon.

Monday, and the haying/baling was out in full force. Greeeaaat….I get Oats and notice he is absolutely COVERED in dried sweat. Everywhere. He has a ton of messy poops, and seems unsettled and very salty/sweaty.

We head out to the arena, and it’s a beautiful day. Hot, sunny, gorgeous. I am 100% alone at the barn, not a soul around- which I was not thrilled with. Oats walked around well and was responding nicely and seemed fairly relaxed. Until…

Hay baler starts up behind the indoor arena, out of eyesight but definitely not out of pony earshot…

Oats starts thinking about losing his shit. He’s in between meltdown stages…

I jumped off before he tried to exit the scene stage right. We walked around and around, and he didn’t chill out really at all. I let him graze and he is definitely a nervous eater. When the sounds seemed to abate a bit, I got back on and walked/trotted in the ‘safe zone’ away from the baler. He was okay, but certainly very on-edge. The baler stopped for a bit, and we were able to canter at the top of the arena, which was nice.

He spooked HARD a few times, and was scaring himself, but we were able to end on a decent note of walking large around the arena out of the ‘safe zones’ once each way.

So, that was ok but kind of more than I really wanted -or- bargained for the day after running the half marathon…It was hot, I was tired, and not really looking forward to dealing with Oats in alarm mode…

He was very sweaty, he is an anxious sweater. So, I hosed him off and he was edgy and quite alarmed, looking and looking for the scary hay baler. Sighhhhh….

I let him sit for a bit when I was putting away my tack and he was scraped off and cooled out, and when I came back he was like OH THANK GOD YOU’RE HERE and was licking my arm?! He was definitely looking to me for reassurance.

I texted a friend about it and she said he was better today when he got turned out, wasn’t racing blindly around like a maniac and wasn’t frothing into a lather…

And I am taking today off to finally take it easy after the run. It’s harder than you think!

Had an interesting dressage lesson last night that kind of resurfaced some of my fears (specifically, the fears I have that Oats is going to be a twit and start bucking/getting humpy on me again).

Looks can be deceiving!

Note- he hasn’t really pulled this stuff in months- since that one bad time in October?

But the fear is apparently always there, albeit not as close-to-the surface as it used to be.

We worked on engaging/pressuring ‘intensity’ at the walk and trot. BIG walk, tiny trot, BIG trot. It was starting to melt Oat’s brain, and I got kind of pushy with my hands when HE got pushy with his head. When his head came up, my hands defensively came up! I can’t seem to help it! When he started tossing his head and getting balky, I got anxious. I started remembering what he was like before, when we started increasing the pressure on him.

But then, Karen said (while I was frustrated and it felt like he was messing with my head!!) if his head goes up, your hands don’t go up! Think about your contact/hands like guard rails. They are there to guide. They don’t go sideways, up, down, anything. They are guiding.

Look at my horse: My horse is amazing

And you know what? The super annoying messing around slowly started going away. My anxiety about his behaviour still existed, but it felt like I was more secure. I could do this! I could be solid, guiding, and push with my legs- it didn’t matter if his head went up, down, all around.

We did get some fab canter- and I sat the canter/gallop the whole way! Whee!! Go us!

And I felt a lot more secure, and my anxiety was starting to melt away. It’s funny, how deep the roots of stress and anxiety lay though. We’ve been having some amazing breakthroughs in lateral work, like every week, and then this week, some more ‘intense’ work at the trot and I have a melt down? Silly!

Of course my friend came to watch and this is the show we put on for her. SIGH! Hahaha, oh well. Horses- can’t live with them, can’t live without ’em sometimes.

It did make me want to start jumping even more though. I sure like that feeling more than wrestling through dressage some days, even if the cross-training we are doing is definitely helping us progress. It is hard-won, some days.