Actually, I had pre-Christmas blues instead of post-Christmas and WOW they were horrible. I wrote a cheery blog post two days before I had time off, I had talked with a counselor and I was feeling pretty darn great!

And then my last day of work, basically everything exploded and it was horrible.

I learned that two of our staff members were leaving, to add to the two who had already left in Dec. I went to the gym for lunch, and came back to work and was called in to my friend and former manager’s office urgently.

I was curious, wondering why she needed to see me so urgently?

Our friend and my former colleague had died that week. 😦

I was completely shocked, stunned and heartbroken. She is so young, only in her early thirties. I knew she had been sick, but I had no idea how bad her illness had been, and how long she had been in the hospital for. It was heartbreaking.

I numbly went back to my desk and felt terrible.

I stumbled through work that day, talking with our mutual friends and colleagues. I felt like I was sleepwalking, that this wasn’t happening to her. When I came home, I cried.

I also learned that Oats was lame again, literally three days before I was also supposed to be flying to visit family in Kelowna. WTF.

I collapsed, basically. I didn’t know what to do and it felt like my entire being, not just my brain, was collapsing inward on itself like a dying star.

My dear friend who is a total sweetheart came by and gave me some of her delicious toffee-bark and chocolates (she is the best!!) and she could tell that I was having a terrible time of it. I was.

So there I was, a few days before Christmas and my world imploded.

Kind of a busy week, being a single dog parent is not my most favourite thing! Oh well. I had my jump lesson last night, my dad came to watch which was nice of him. The lesson was kind of good and bad- The good was it was a interesting exercise, the oxer didn’t bother me at all, and when I rode focused & correctly, Oats rewarded me!

Oats says- do it right this time!

The bad- so many stops! UGH! I had a lot of trouble focusing on the more technical elements of the exercise- a skinny jump on a circle approach, for example. I held too hard with my hands, couldn’t seem to figure out the distance, got tentative at the bending line and BOOM! Oats would stop. Sorry, try again! He seemed to say. He is not really a stopper either.

So we did try again, and when I softened my hands/arms, and let him free he jumped fantastically. It was lovely!

So what figures with my lack of focus? UGH.

Not normally a problem I have, hahah. Oh well, Oats is an excellent teacher in this regard- he says no when he has an issue, and goes nicely without holding a grudge when I do it right! Now, if it were so easy I would allllwayyys do it right, eh??

I have a rider biomechanics workshop on Sunday that I am looking forward to- hoping to learn some new stuff! No racing this weekend, which I am glad for because my legs are so tired.

Dinner out tonight at the Bella restaurant at Bear Mountain with the folks as their last night in town, and hopefully I nab a ride after on ol’ Oaty. I can’t get enough of him!

Had our regular jump lesson last night, and it was really good! I just felt overwhelmed with gladness…Almost sad, in fact, because I enjoy my pony so much, and I know this- all of this- is fleeting.

Compared to this, it was peanuts. But so fun!

I guess we enjoy things more because we know they don’t last forever?

Our lesson wasn’t groundbreaking or jumping super high or fantastically or anything, in fact it kind of pales in comparison to what we were doing this summer, but it just…Felt good. It was funny, I was laughing in it! Can you imagine? 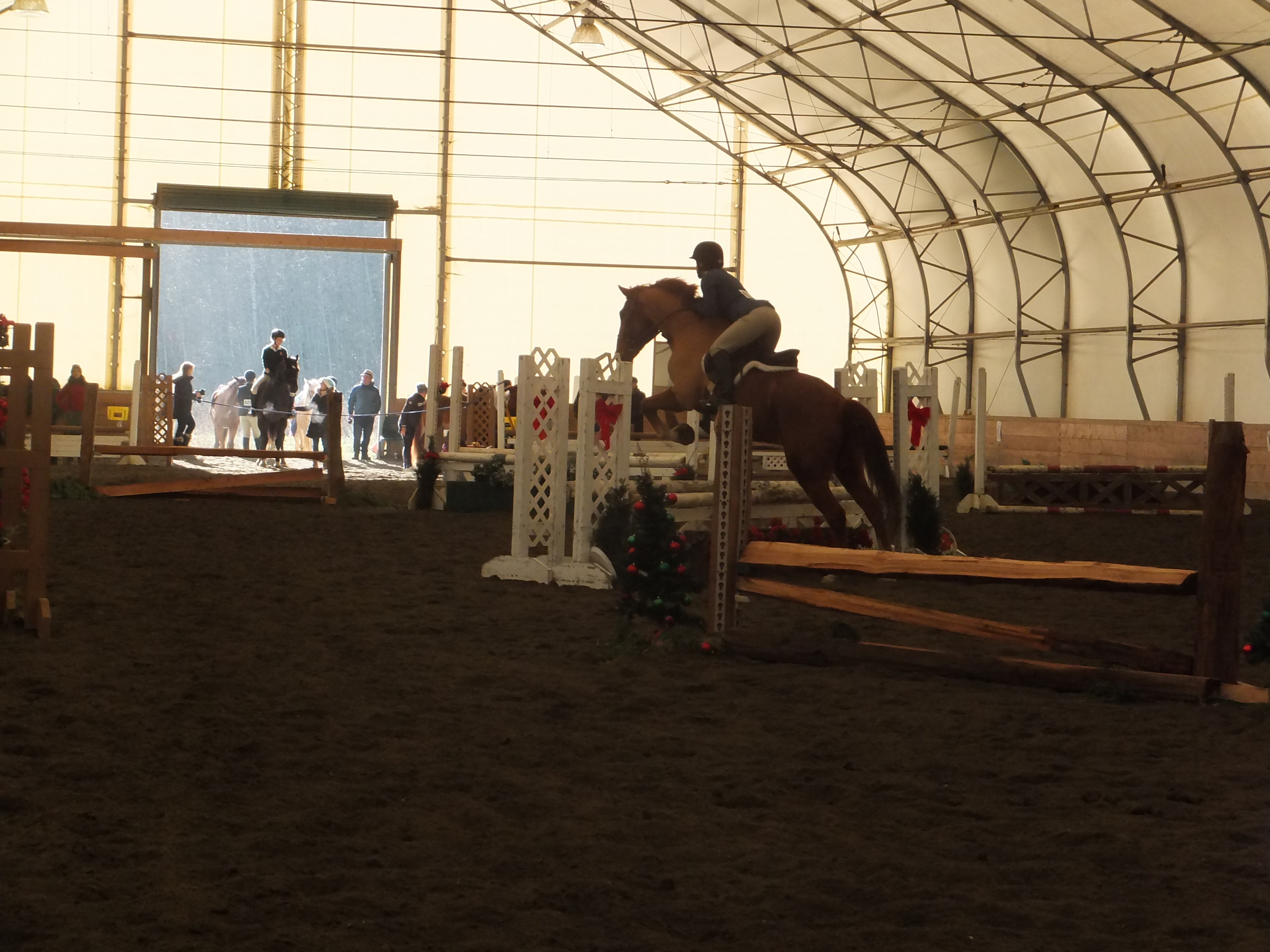 We worked on these wonky curving line set-ups, trot in to an x-rail, canter 6 strides to a small jump, come around to the jump on the circle…Very twisty-turny. But fun, and I felt really smooth (even though some of the efforts were SO awkward. HAh.) and you know, it just rode really fine. I did have trouble getting him to land on his right lead, on a straight line, and yet we were just nailing the left-to-right lead change at the jump on a circle? Horses…Gotta love ’em.

And a bit of a blast from the past!