We’re reclaiming our terrible year(s) and doing everything we can, right now! Life is so fleeting, so tenuous, so delicate and so fragile so why not do everything you can, all at once?

That is literally my life’s motto, so my friends and I who have all endured some truly sucky times these past few years decided to take our horses to the beach!

And boy, it was exciting! 😉 We went late because we were anticipated to have an absolutely miserable day (atomspheric river??) with pelting rain but we lucked out and it didn’t even rain on us! Grey but not that cold. How amazing is that!

Some photos…Enjoy! We did end up getting caught by the tides and one of our member’s horses was kind of having a freak out about having to go in the crashing waves to get back to the horse trailer, so we had to backtrack and then kind of dramatically crash over some rocks to jump to the main pathway, safe from the waves. All good though.

So I know I grouched mightily about how miserable my ‘summer’ has been but you know what, I finally have something fun to talk about!! 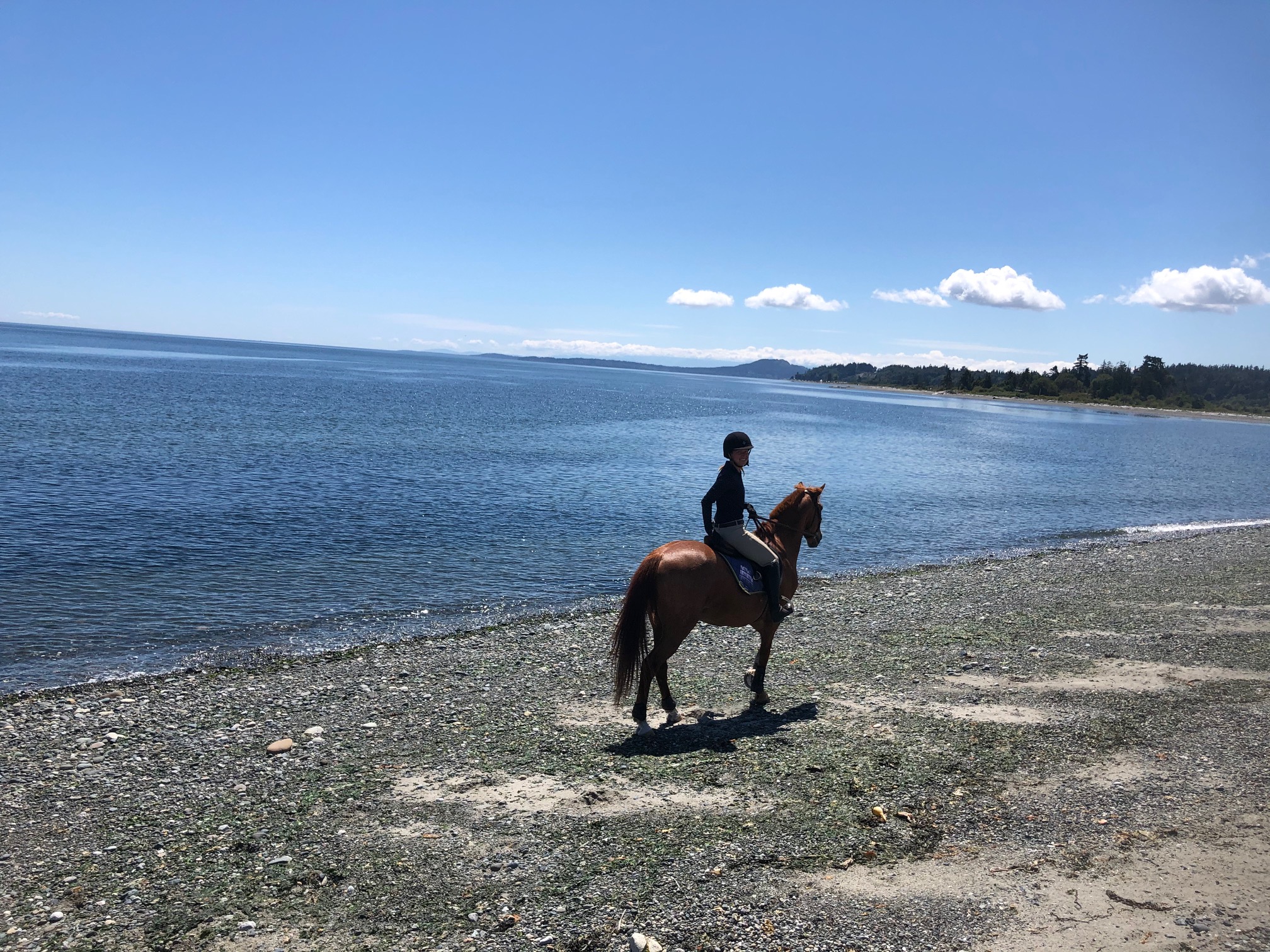 My dear pony is sound again, so I took Monday off work to join a few friends for a beach ride!! I had this idea last week, when I was moping around because Oats was lame with an abscess…I just was DYING to do something fun with him, you know?? 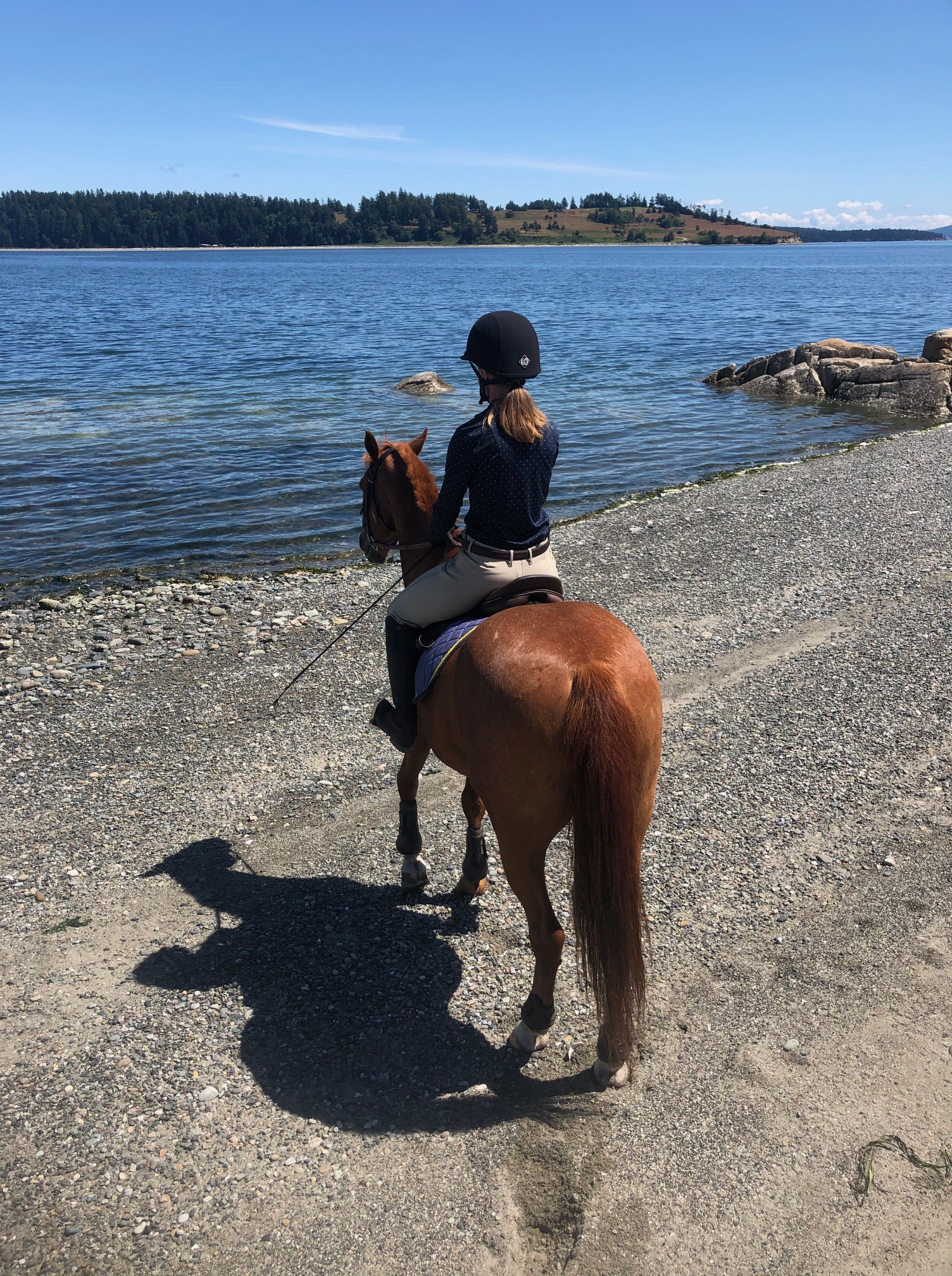 Fortunately it resolved by Wednesday, I rode on Tuesday and I was able to have my jump lesson on Saturday even! And then on Monday it was the big ride 🙂 Even better, the weather finally cooperated and it was sunny for once. We actually had a pretty lousy weekend for sun- 16 deg and raining for pretty much all of Saturday, which was great (NOT) because I had invited friends over for a small patio party…That turned out to be indoors wearing jeans and sweaters because it is so cold here now! 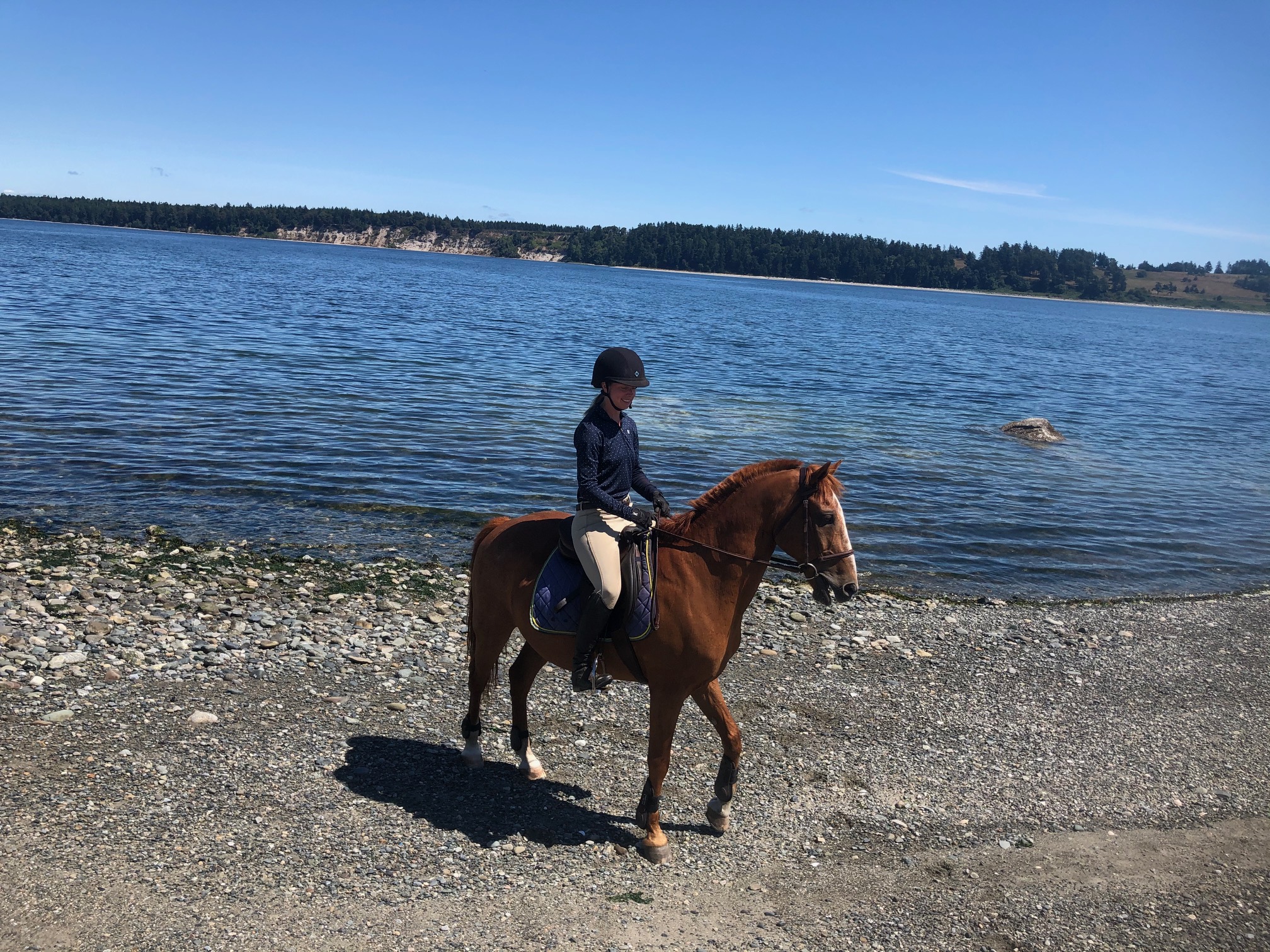 And then finally Monday was nice! So we did it!

And the horses were pretty well behaved too, considering how busy the beach was. Boats, trucks, RV’s tents, beach umbrellas, kids, babies, toys, dogs, bikes, kites, beach blankets…You name it, it was there and flapping around! 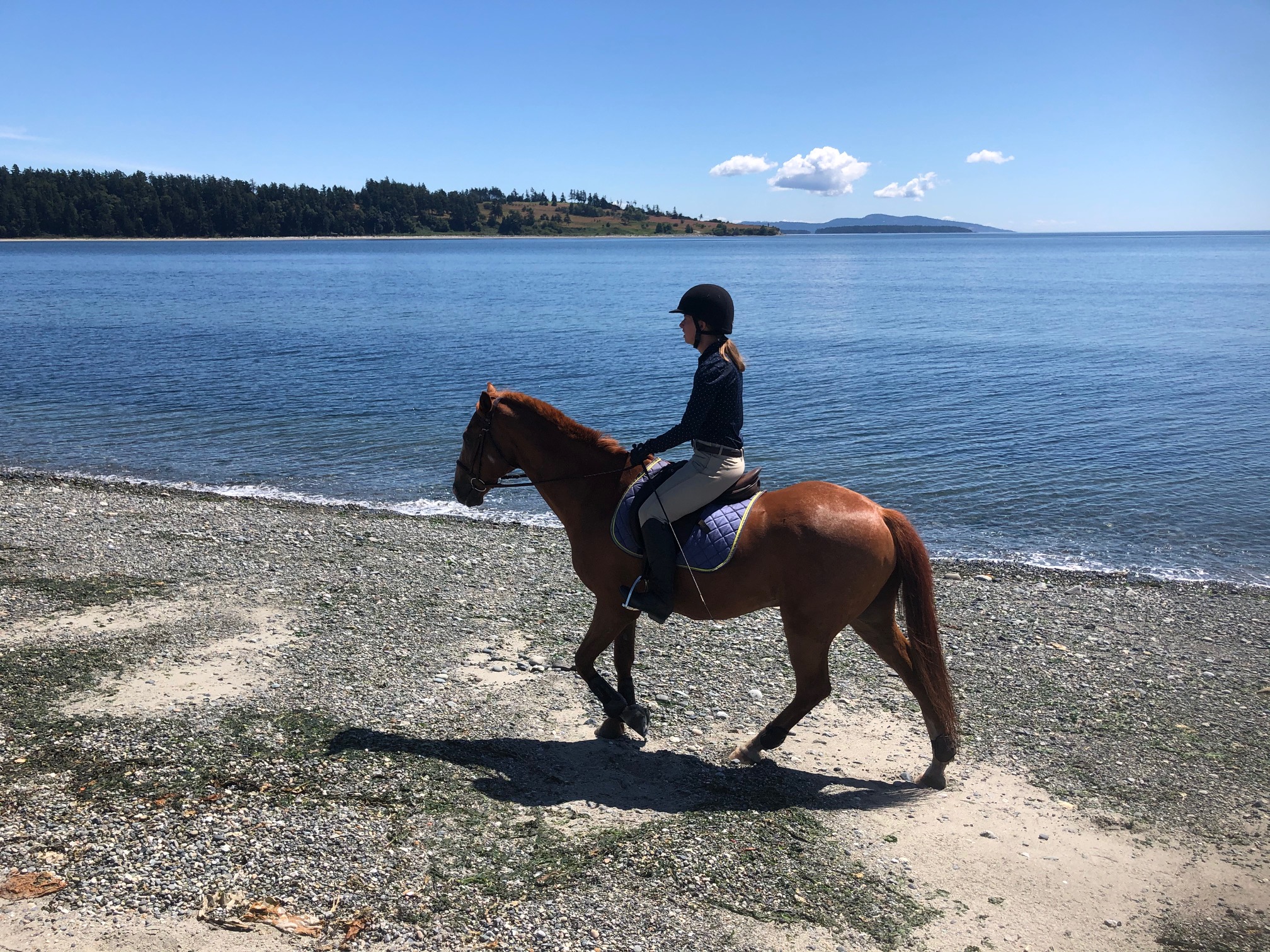 It just felt SO GOOD to be able to go and DO something with my horse since it’s been such a lame and boring summer, with the occasional absolute disaster.

I am so, so happy that Mr. Oats is back in action. I can’t even believe how frightening and stressful the past few weeks have been, for me and him 😦 His cough subsided by Friday, and I zipped out to the barn to test him out. All clear! 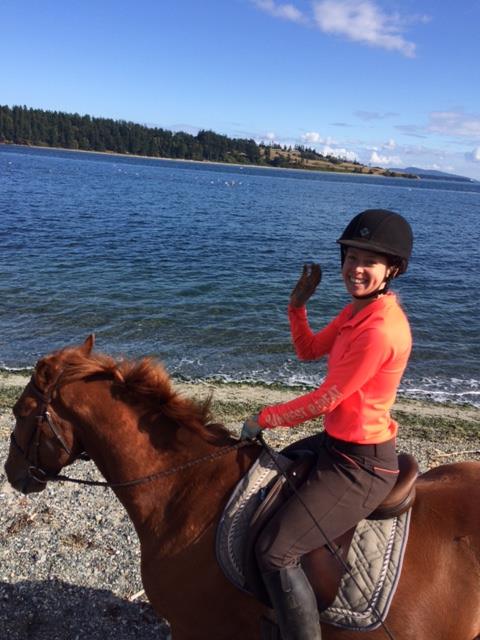 Ok so Oats looks a little unimpressed…But I was so happy!!

The only thing I was MAJORLY angry about was when I finished up with Oats and was putting him back in his pen, I moved his haynet and got stabbed with thorns. WTF? I pushed him away to investigate, and saw that to my absolute horror, his hay was FULL of  blackberry thorns. All weaved into the hay. For a horse just recovering from life-threatening choke and a horrible cough. I was seeing RED.

I put Oats into the barn’s crossties and pulled apart his hay. It was EVERYWHERE.

I pulled the flakes apart, and removed all of the blackberry thorns. I then texted the barn manager to let her know, and let the feeders know that if he eats blackberry thorns, he could die. This is serious.

But on a happier note, I caught it when I was there- weird because I’m not even usually at the barn on Fridays, but I couldn’t wait to see how his cough was. Good timing??

I do still feel angry that potentially his choke was caused by the shitty hay with blackberry thorns in it. Like, what the everloving hell? 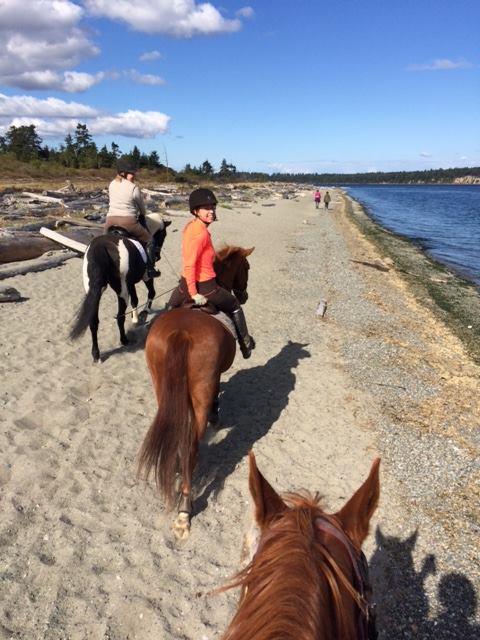 Anyways…I had to cancel my dressage show because his cough was so nasty, but my friend suggested we try a beach ride instead? And so on Sunday, that’s exactly what we did! And I had BLAST!!!! Oats was a little freaked out but settled well (deep sand will do that, ha. It tired them right out). I am so lucky to have another chance with old Oaty.

Life is showing me to take any opportunity. There may not be a second chance. 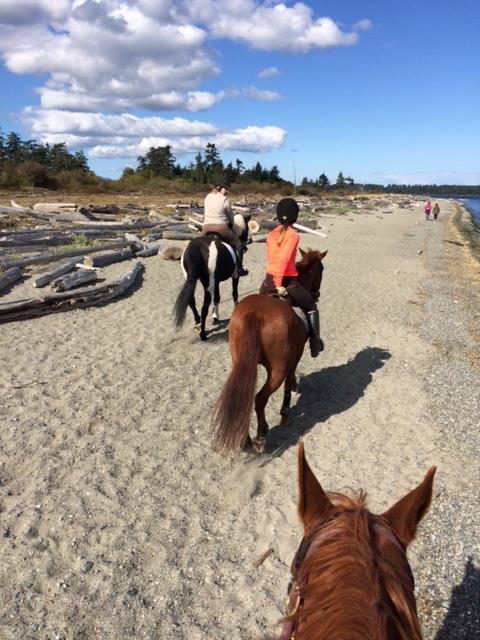