So every Sunday my husband and I do ‘Sunday Funday’ and pick a location to do a mega run/hike/trail run at. We have gone up island to Duncan to run Maple Mountain, Mt. Tzouhalem, to Courtenay/Comox to run to Cumberland, and locally, the Galloping Goose in Sooke to the Malahat run. We have been all over!

You cross a lot of small creeks/waterfalls.

Last weekend I ran solo, a few loops of Elk Lake, which is a pleasant solo run because you can run to your car to get water (there are no water fountains open anymore because of COVID19 and I guess no hand sanitizer in the washrooms/outhouses anymore either, to my extreme displeasure). 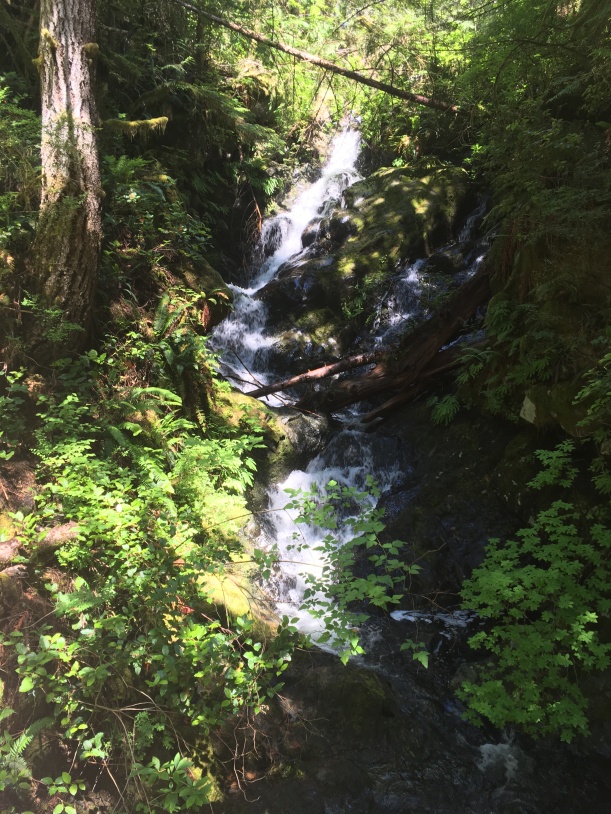 This weekend we went somewhere a little different- the trek out to the Juan de Fuca trail! We are very familiar with the 1 beach- China beach, but we wanted to trail run from China beach to Bear Beach. It’s not that far- about 7km- but can be quite wet, muddy and rugged. And boy, it was!

We ran the 2km to China beach and it was PACKED with people. Every available square spot to park in was taken. People were crawling everywhere. I really didn’t like that- it’s just too busy now, the new Thetis Lake or East Sooke Park or something? 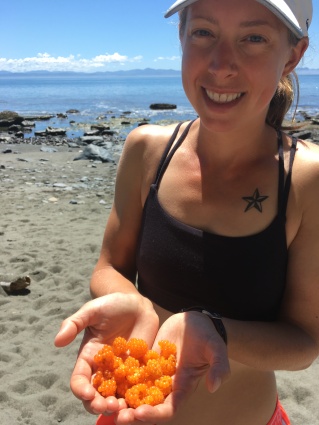 So it was a lot of stop and go.

We got to the beach and it had a ton of people on it too. A nice day (rare for us, we don’t really get nice weather anymore in the summer) and I guess literally everyone wanted in.

Ian and the big splashy rock 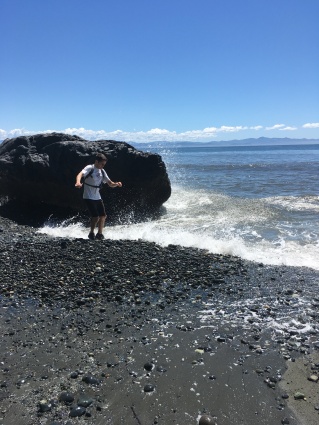 and he got wet feet!

So we went down the beach and picked up the Bear beach trail and continued that way. It had far fewer people, but for a quite narrow and technical trail, it was very busy with camp hikers coming back. One guy even gave us licorice, haha. Of course I accepted it! 😉 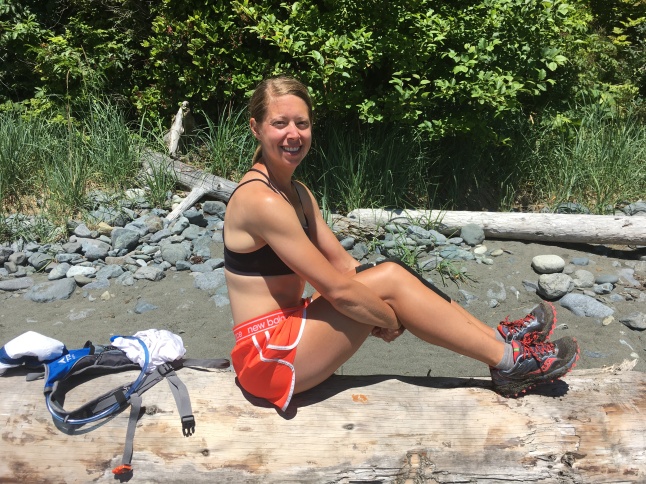 We splashed, climbed and scrambled our way to Bear beach, which was completely deserted. So that was worth it! It was a gorgeous day. I picked a bunch of Salmon berries, we enjoyed our Lara bars (protein ones, I don’t like the blueberry-lemon, ick I think it tastes like lemon Pledge, but the Apple Cobbler are good), and took some photos, and then ran back. On our way back we saw a mink!!! Just a zip of brown and he was gone, into the rocks to the ocean. Wish I could have seen him up close and for longer.

The cliffside was really cool!

It was WET! My legs got covered in mud, hahah. Big splashes everywhere!! I gave in and gave up and just went for it hahahahhaha.

By the end of the run, even my toenails had mud embedded in them, hahaha. A good adventure and a lovely day, to make up for how miserable and craptacular I was feeling on Saturday.

Wow, where do I go from here? We left the jungle, spent a night in Iquitos, which is interesting and very much a frontier-town. We enjoyed margaritas (not great) and pisco sours (better) while chatting with a very friendly Dutch ex-pat who was in Iquitos writing a book. Cool eh?

It was a very noisy town, tons of motos and tuk-tuks roaring around. We took one to the airport the next morning, headed to Cusco and eventually Machu Picchu! Flight was very bumpy which scared me, I hate turbulence. Once landing in Cusco, it became very apparent that both Ian and I had picked up a stomach bug- I blame Iquitos for mine, his was worse with a fever (jungle fever?).

We then were greeted by our driver, who took is the 1.5 hours to the town of Ollantaytambo, where we would hop on the Peru train to the town of Aguascalientes, which is the landing base for people going to Machu Picchu (if you are not hiking it).

The drive was fine, despite our stomachs revolting… And then in town, we got the train and it’s actually quite nice! And it freaking better be, considering how much $$$ it costs for a 1.5 hour train ride to Aguascalientes. Once in Aguascalientes, I was stunned by how quiet the town is without any cars or anything. From the jungle to the mountains, Ian and I were a bit shell-shocked, and quite frankly, pretty sick.

We holed up in our hotel room (which was super noisy and weird, with like three beds in it…) but mostly clean? Had a miserable night of no sleep, and were up bright and early at like 6am to try to eat (nope) and get on the bus ($$$) to Machu Picchu. The bus takes 30 minutes of winding up hairpin turns to the mountain. It’s kind of scary too.

Once up to Machu Picchu, we hauled ass to run to get into Waynapicchu, the ‘younger mountain’ that we had permits to hike up. They only let 200 people hike it per window (7-8am, and 10-11am). I can see why, it’s freaking rough at the top and it was so cloudy and foggy I couldn’t see how far, exactly, the plummet is!

We huffed and puffed our way up Waynapicchu. I climbed on my hands and knees. It was cool but yeah, not doing that again.

Once we came down, we then hired a guide to take us through Machu Picchu the right way. Well worth it, I think. We saw so many cool things, including a wild chinchilla! The views are breathtaking. If you do one great wonder of the world, I highly suggest Machu Picchu. It is a pain in the ASS to get to, but worth it if only once.

We had a long-anticipated long (ha) weekend and boy, did we cram it full of things to do!

The day was PHENOMENAL! Photo courtesy of MEC Victoria.

I even got up early-ish both Sat/Sun to be able to get stuff done. So what did we enjoy this weekend?

Mom’s hat on the left, mine on the right.

Back from holidays and wow, we did a TON!

So…We did pretty much everything you CAN do in Calgary! The weather was a mixed bag- rain and thunderstorms the first night, cold the second day at Spruce (seriously- I was wearing a sweater, jeans and a jacket! I didn’t even bring cold-weather clothes with me, so had to borrow them!), and then warmed up by Wednesday to about 30 deg for the rest of the week.

Staying with family is always a bit of a challenge- it’s nice to stay with company, but you also run the risk of irritating them, not giving them enough space, or they feel like you don’t want to hang out with them when you want to *give* them that extra space…It saves $ but adds frustration. Always a bit of a tightrope, a balancing act.

View from the top of the Stampede

I particularly enjoyed the rodeo this year, and I even had some amazing fair food- peanut butter and jelly sandwiches deep-fried on a skewer interspersed with deep-fried Reese’s peanut butter cups! OMG so good.

We also tried the Jurassic Pork pulled pork mac’n’ cheese. Also a winner! Not a winner- the Crazy Cones- too much cone, too little lousy ice cream. Blah.

Spruce was classic as always- Ian bought me a pair of gloves there, they had free hot dogs too! I ate three- which was pretty much two too many…My stomach… 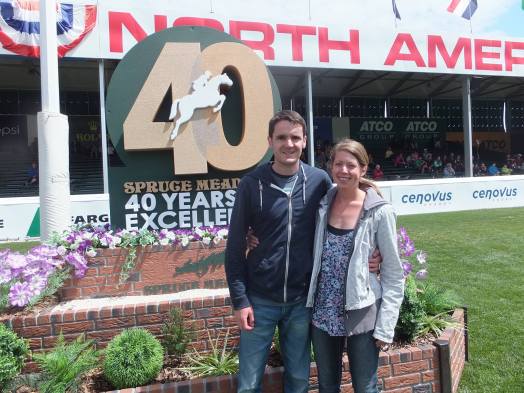 I remember being here celebrating 25 years!

Canmore was really nice actually. We did a short hike up to Grassi Lake, and climbed around a bit. I saw a pictograph! Very cool. We finished it off with a lunch in Canmore. 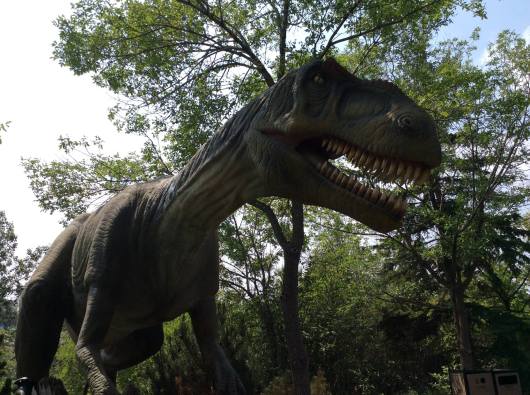 Drumheller was cool, a lot cooler than I thought it might be. The town itself is a big nothing…No neat shops, just small, dusty and hot. The Royal Tyrrell Museum was fantastic! Love the dino info, and so informative.

Then the Hoodoos were so cool, and it felt very hardcore to be hiking around in the heat. We also visited Wayne, pop. 33…And the Last Chance Saloon, where we got a beer, and then hiked up to the grassy plains area. Nice and hot. 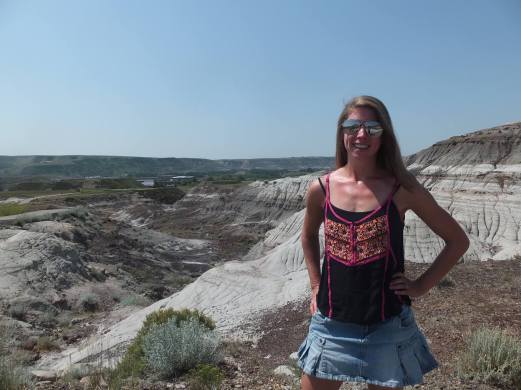 A hot day in the badlands

The Calgary Zoo was also really neat, the animals were SO active! You know how rare that is? So rare! The bears were acting silly, the tigers were prowling, the female lions were nuzzling and grooming each other, and the butterflies were even friendly, with one hitch-hiking on my (very attractive to it) orange purse. 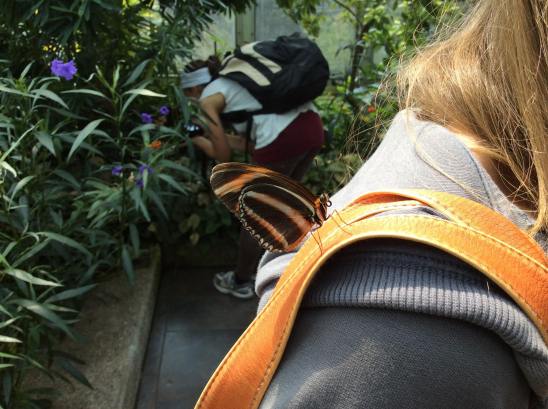 The night we flew home, we watched bad weather come rolling in. We spent the day boating at Ghost Lake- a very cold lake outside of Cochrane (cute town), as my sister’s boyfriend owns a fast speedboat. The clouds came in, and by the time we made it to the airport, thunder and lightning started up. We sat on the plane, which was stifling hot and muggy, for about an hour before they cleared us for take-off. Lucky thing we left then, as the storm kept going and they closed the airport until 11am the next day! Jesus!

Got home around 9pm, and was so tired. It was like the whole week caught up with me!

Saddling up to the bar at the Last Chance Saloon in Wayne, AB

Rode Oats the next day and he was soooo nutty. Freaked out about the stuff moving around the outdoor arena, spooky and snorty. We got through it ok, but man…After a week away, rough riding and spooking wasn’t really what I was looking forward to! He did look cute playing with a feedbucket after the ride though, so can’t stay mad…

This week- I’m riding tonight and dressage lesson tomorrow, may ride Wed and resume reg. jumping lessons on Thursday. No rest for the wicked though- going camping on the coast this weekend for my b-day!