Therapy, that is. Ugh. I am still very much injured (current diagnosis is a muscle tear in my abdomen wall, near some particularly spirited ligaments that pull horribly on my pubic nerves…). 😦 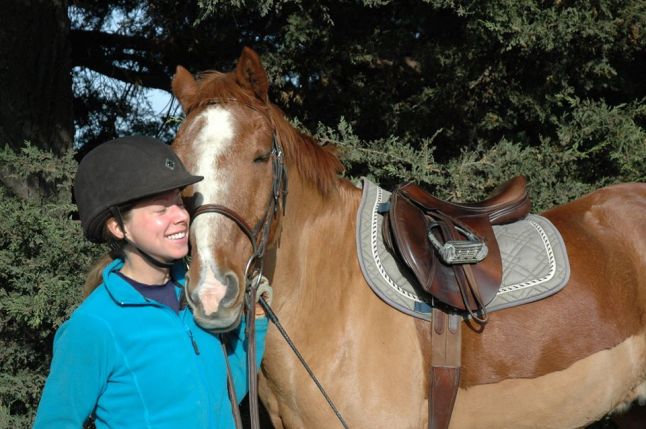 Photo thanks to my friend Katie! All snuggles for Mr. Oats.

I injured it three weeks ago, and it’s been on and off painful since. The only things that really aggravate it are running, and riding, natch! Which I do every day? Dammit. I am still trying to ride and run but the running is so painful that I definitely have been toning it wayyyyy back. I even downgraded a half marathon that I was supposed to do to a 5k, which was still VERY painful to run. Man.

At least my pony loves me! Photo thanks to Katie H.

Riding this week was pretty good, had a dressage lesson on Friday that was quite humbling…Like after an hour of lesson, this is what my warm-ups should be? Yiikes..We are not there yet, but we are getting there. Otherwise have been enjoying some flatwork, rides with friends, Halloween candy and Halloween parties!!

Happy Halloween! From a friend’s party this weekend, one of TWO parties I went to!

I had a shockwave therapy appointment yesterday morning and jesus it hurts~ It is no joke, I didn’t realize it was going to be so painful. And they say that it’s not even on a bone, which is more painful. Yikes. I have another session on Thursday to try and speed up the healing for my muscle…Can’t say I am looking forward to it. I felt beat up yesterday and in a fair amount of pain.

I am drowning my sorrows in chocolate and wine!

I didn’t update after my schooling hack on Tuesday because it was non-remarkable–Oats was being a good pony, we did some lateral work to limited success, and well, it was fine. Yesterday I had my jump lesson and something interesting is starting to dawn on me…

As I get better about my anxiety, and am learning to manage it and appropriately stretch my boundaries, I’m coming up against something my equine counselor warned me about: frustration. She said with learning comes frustration or being mad about something and that is just the way it is expressed, as part of the process.

We worked over a small gymnastic and then moved on to a little course. The gymnastic was a two-stride x-rail to vertical. Nicole moved it in because quite often Oats is backed off and not super forward through the lines, and if horses were jumping it before us, then it’s set too long.

Well! We worked through it, I complained that he felt too slow and she said he was eating up the lines, and she had to move the jumps back??? He was making the horse strides through the gymnastic, which pretty much never happens, and I was complaining that he felt too slow? What is going on in my brain??

Very interesting. The course itself went well and funny enough so did the gymnastic. Oats did have a few moments of extreme befuddlement over green box (which he has jumped a million times before) but now it was on a circle, in a shadowy part of the arena…So he jumped it like it was 3ft high and 4ft wide? WOAH! He did that every time too! I think he was having trouble ‘seeing’ what he was jumping, so figured that overjumping was the best/safest policy…Poor pony, it was kind of hilarious how confused he was by the box? 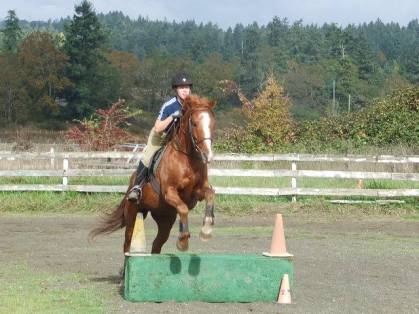 Proof Oats has jumped the green box with no drama.

I did have moments where I was very close to my comfort zone and I let Nicole know, but I think it’s just a phase in my learning process right now. I never felt scared or super worried, just kind of…oomph, let’s GO Oats!

Also- Oats would like to wish everyone a happy Halloween! I think he looks better as a bunny than as the devil, don’t you think? 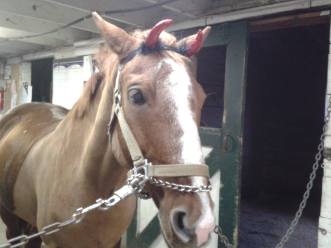 Oats as ‘himself’ last year… 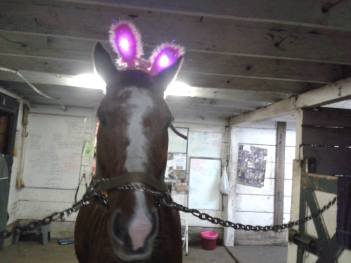 A huge success! Friends came over on Halloween and we made caramel apples. 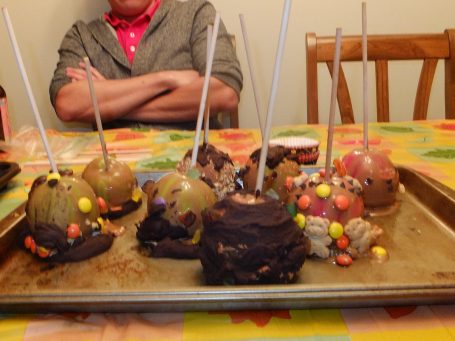 They were great, a recipe for diabetes if there ever was one, haha.

I bought 3 small bags of the Kraft caramels, and we had a variety of garnishes (smarties, teddy grahams, gummi bears, gummi worms, Reese’s, Smarties, choc chips, crushed peanuts) and we went nuts on them!

Key things to remember- put apples covered in caramel in the fridge to set a bit before adding garnishes, spray the baking sheet they are placed on with PAM first.

They will still stick a bit.

Be careful with adding melted chocolate, it made our caramel melt right off! Still trying to figure how that one works. Maybe only use it if you plan on covering your entire apple, caramel and all.

Enjoy! I don’t really recommend drinking caramel apple ciders at the same time though, wooooah…My stomach hurt from all the sugar. Too sweet! I didn’t even want candy or anything sweet the whole next day even! And this is ME we’re talking about. 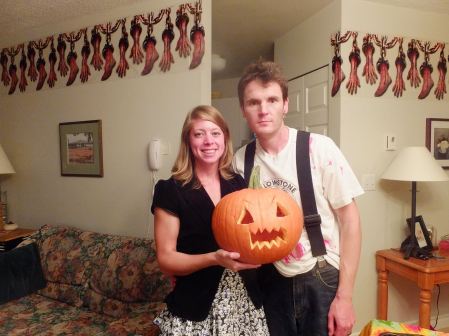 And a key ingredient- Friends! They make it all the more fun 🙂