Ok you guys, I did it- I made my debut back into running! This weekend was one of firsts for both of us- Ian ran his first marathon (debuting with a smoking-fast 3:15!!) and I was able to heal enough to finish a 10k- my first race in months and first successful long-ish run! Yeah!!

A really well organized race. One for the books!

We were at the Okanagan Sunrype Marathon (marathon weekend offered a 5k on Saturday, a 10k, half and full-marathon on Sunday), and we had the BEST logistics. Our hotel (the Prestige) was across from the City Park where the race, bib pick up and start/finish lines/awards were. How amazing is that?!!!

Unfortunately I was not feeling amazing- last week was literally death by a thousand cuts..

Tuesday- stomach not feeling great due to the day before. My ovaries felt like someone had been punching them with knives… Oats decided he would also run away from me after my ride, and spent quite awhile racing outside the indoor arena in the freaking pitch black…Stupid horse!

Wednesday- getting a cold

Friday- off, and cramps, and nausea make a comeback along with crushing fatigue and bleeding, and still sick. YAY? Shoot me.

Saturday- cramps, bloating and bleeding, still sneezing and nose running to beat the band. Feeling kind of defeated the day before the race, but luckily our drive up to Kelowna was uneventful. We had a lovely dinner with Ian’s sister, who lives in Kelowna now and will be there for a few months.

Sunday- race day!!! I had ZERO expectations. Ha, none. From feeling completely miserable due to chronic health problems (ovaries), to being sick with a cold, and having oh, a good 2.5 weeks of actual running led me to severely limit my hopes.

The race was good though! I struggled my way to the front, as the start chute was quite narrow. Some real fasties there, but it definitely thinned out to the front. I started out strong, and immediately passed a few women who were just slightly out ahead of me. I don’t normally pass people that quickly, so I was surprised. I’m more of a slow-burner…And here I was, in front of people at KM 4. Wha?

I reeled in another woman, and then this other guy and I played piggyback, until he definitely passed me at the finish, ha. I had no kick, and I could definitely tell that I was not that fit…It was exhausting! My sinuses hurt and I had a racking ‘run cough’ at the end. BUT I was very happy with how the race itself went, and pleased with my time- 44:32, which is a humble time but I guess ok for this race- I placed third AG and third overall. Sweet eh?

I had time to zip back to the hotel- excellent location! And grab my dog for the awards ceremony. A nice bronze medal for me 🙂 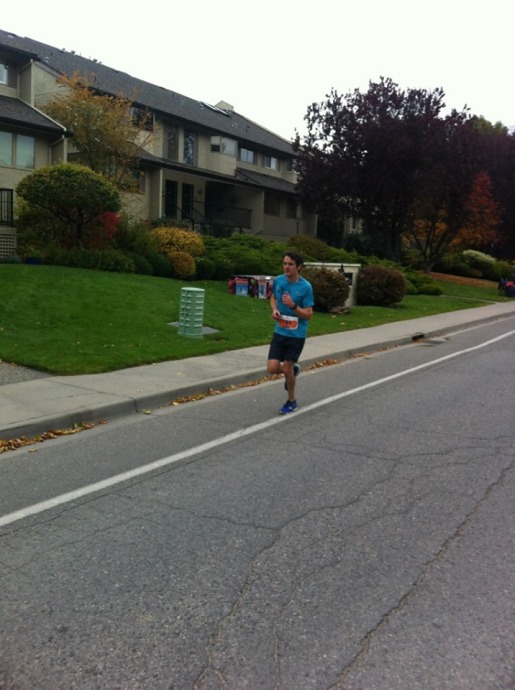 Look at him go!

And then it was time to cheer on Ian as he finished- and he did it!! He is officially a marathoner. A good, solid weekend for the two of us, for very different reasons. We then celebrated with a bottle of champagne in the hotel room with his sister, and went on a small ‘brewery’ crawl to try out the many, many breweries that Kelowna had to offer.

The only fly in the ointment…The weather was TERRIBLE after the race, ha. Rainy, cold and there was basically a blizzard driving home the next day. Yikes. DO NOT want to repeat that drive anytime soon…