I feel like each year I do these, my first show is very ‘blah’ and I’m not overly thrilled with my test riding/Oats’ performance. This year was no exception. It’s like we need an outing to kind of be crummy/not exceptional to figure out what needs to be fixed. 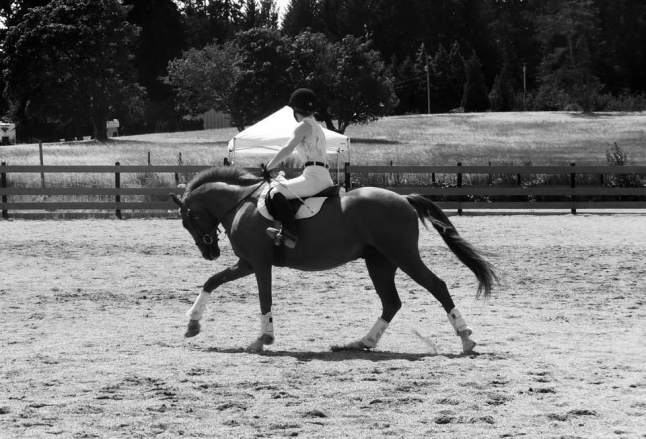 This season we made our first ‘First Level test 1’ debut though! And I was happy with how the test rode generally, I wasn’t pleased with the level of cooperation and roundness I got from Oats in it. He was quite resistant, balancing off my hands, his canter was quite high-headed (to say nothing of his canter lengthenings..ha.) All in all NOT our best work.

We also rode our Training Level Test 3- and a brush fire had started in the Metchosin hills, so in the middle of my test a fire siren started BLARING from the fire hall! WHA? Oats is apparently a saint, because he didn’t blink an eye at it…It freaked me right out, and shattered my concentration. Soooo yeah, that test. Ha.

Oats however did spook VERY hard twice at ‘A’. Silly pony! In my first test he also stopped to poop at A and then spooked at it later. ARGH!

I really liked judge Melanie Houston’s take on Oats and agreed with her on the points that needed to be addressed.

So like, yeah it was fine. A nice day, tests rode ok, but I’m honestly at the point now where ‘ok’ doesn’t cut it? Our next show and tell is in July and I have higher expectations for us by that point!