My car broke down (since fixed) so I had to cancel my usual jump lesson that I have on Thursdays. I also had my phone on silent so I didn’t hear it ringing with an emergency–Oats was choking and going into shock.

I still want to cry thinking about it. When I got into work on Friday morning, I had 23++ missed calls, voicemails and emergency Facebook notifications. I was TERRIFIED.

The good news is that he came out of it fine *he has bad cough now but he survived and that is what is important. The only thing. It seems like he had eaten something like a twig or blackberry bramble in the field, couldn’t swallow, came in to eat dinner and his dinner starting coming back up. He was panicking, couldn’t swallow and was coughing up phlegm.

He was shaking, trembling violently and sweating and breathing heavily. If this had happened and nobody noticed, he would have died. Luckily for Oats, his pasturemate’s owner saw something wrong with him and saved his life by calling the vet. He was intubated and the blockage was pushed through. He was in severe shock though, and that took a lot longer to come out of.

My god. I was horrified that the ONE day I am not at the barn this happens and they couldn’t get hold of me. My god. I was crying at work, saying I can’t deal with this again. My work understands, so they let me leave as soon as my car was back from the shop so I could go and see Oats.

I zipped off asap and he was back to his old self *(with a terrible cough).

I am not ready to live my life without Oats.

As part of the 7-run series, Vancouver Island Race Series offered the first race of the season, the Prairie Inn Harriesr 36th annual 8k! We ran this race last year as our first race ever, trying out the series. Before that, I had only run Times Colonist 10ks (twice).

Last year I was impressed! It’s a fairly big race for a ‘small’ local race- between 500 and 600 runners, enough to make it feel fairly competitive and a very fast, international field. 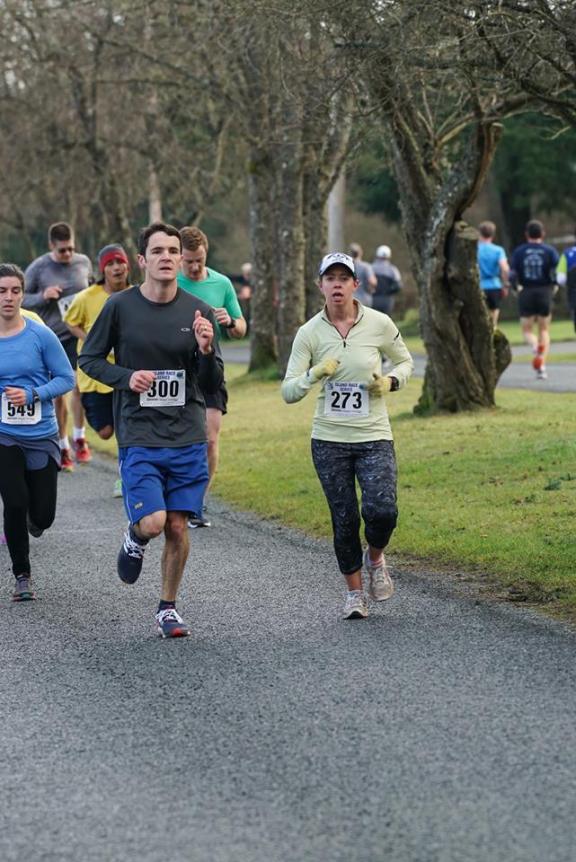 A race that looked as good as it felt (horrible!!). Photo courtesy of Race Stats.org

I didn’t really train as much last year, and this year I was feeling maybe a bit cocky? I had set some very aggressive time goals- 35 minutes (well, like under 36 more likely). And did I meet my ambitious time goals? a big NOPE on that!

I did run home to a fairly decent 36:20 (gun) and 36:12 (net), which is certainly  nothing to cry about. I feel good that I left everything on the course. I was dying! We held a quick pace of avg. 4:31 (well my race time online said I ran at 4:32 but my watch said 4:31) but it was very fast for me. And honesty time here: I do not practice race pace. I absolutely dislike speedwork and would rather even run hills…And it showed. My breathing sucked out loud.

I was immediately struggling to breathe. I was gasping, my mouth was like, hanging open the whole time and I was coughing and choking on phlegm the whole run. It felt like torture! This really nasty breathing was kind of an eye opener for me. If I had taken it down a notch, I’m sure the really loud, horrible gasping breaths I was taking would diminish and I would be able to ‘catch’ my breath again.

But…I wanted to keep at my 4:30-ish pace. Wanted to, wanted to, wanted to. I had to prove something to myself. So I did, and mannnnnn it was rough. I was running at maximum anaerobic capacity for me. And it showed. I had zero sprint near the end, my lungs physically hurt, my throat hurt and my neck hurt? Funny enough, my legs felt fine?!!

At the end, I recovered fine. The course was well marked, quite busy at first – and that is where I lost quite a few seconds between gun/chip time – lesson learned about getting close to the start line…And the volunteers were great, cheerful and lots of encouraging words~!

The food was great- I had orange slices, pb&J sandwiches, hummus and pita/veggies, and great cookies. They had the protein milk shakes I like best (Milk 2 Go) and yogurt too! 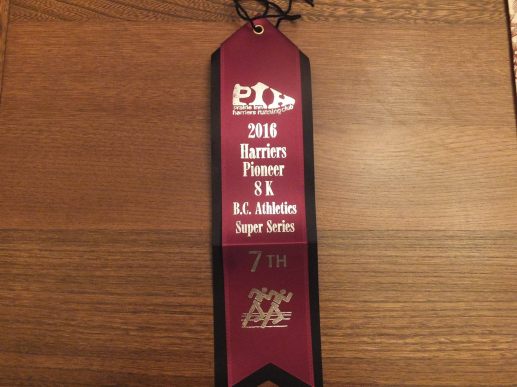 Pretty ribbon! A big thanks to the Harriers for mailing it to me.

And the funniest thing? I even placed in my age division- 7th!! Woo! That was a surprise, and we left before they gave out awards, thinking we were total no-hopers. Well shoot, I should have stayed after all! 🙂 And thanks to my husband for slowing down enough to keep me on track. It was painful but worth it.