Rode this weekend (it was a long weekend for us, so I took Sunday off go to swimming in the river in Cowichan) and had a BLAST! 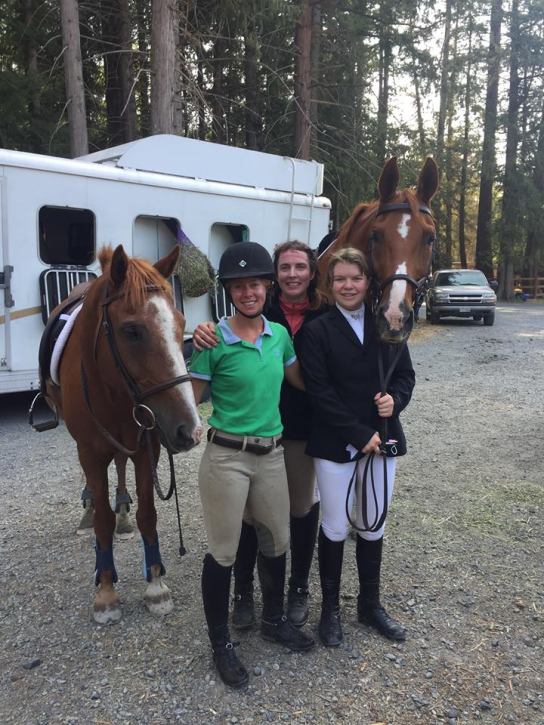 Horse friends at the horse show from the other weekend. Summer is flying by!

Saturday my friend and I rode in all of the fields – literally went from field to field jumping everything. It was so fun! Even the scarier fences that backed me off recently and last year (I’m looking at you, coop) we jumped. True Oats did stop at the coop once, but he figured it out and I figured out how to ride over the fence, not just to it..HA.

He was a bit silly at the gate again (a theme to be repeated in my lesson on Monday..) but no matter. We jumped a few fences in the other x-c field,including a fan jump that I at first didn’t want to jump (too high!) but then when Brenda set it up to it’s original height, I said sure no problem- and sure enough it went great! 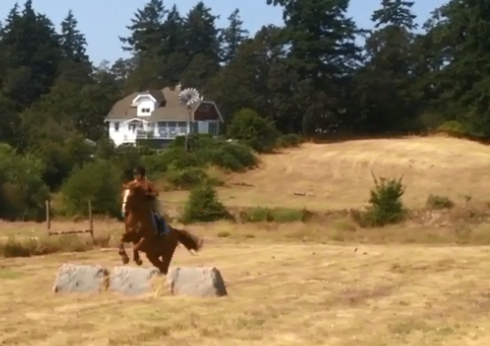 I have now jumped almost all of the jumps in the fields!

From there, my friend and I rode over to yet another field and jumped a small bank going upwards. At first Oats spooked at it- WHA? What is THAT! And then he followed big brother Donato up the bank and then we did it again without Donato. Good boy Oats! 🙂

We then went into the big hay field and cantered up the hill. Oats took this to mean he can bulge his right shoulder and drag me to the gate, so we then had the opportunity to do a bit more schooling, you little jerk…

All in all, a really fun and encouraging ride. I tried things I probably never would have done without my friend there riding with me. Yes!

Sunday we took off from riding to go swimming up-Island, and then I had a dressage lesson on Sunday. The theme? Back to basics, equitation-science style. It was pretty eye opening and I came away with some things to practice (transitions using split-rein, spiraling in and out using on my hands, and turns w/o using leg, just hands). Oats was pretty good until we cooled out, and then he immediately got sticky about the gate and started threatening to rear.

I, having dealt with this, oh every single week or so? Tossed down my water bottle and started getting ready for battle. BUT here’s the switch- no battle needed. Annika asked what the problem was (Oats threatening to rear at the gate, up to the left and won’t go right) and so she said move his shoulder right then. No panic, kicking frantically, nothing. Just…right. He pops up again? No big. Go right. Up again? Easy- go right. Up again? Go right.

By taking the fuss and frantic-ness out of the behaviour, Oats gave up and went right, ha. But he is a persistent little bugger, and when I decided I was going to cool out in the arena, he immediately started trying to rear and go left again. Ah, this again. Ok. Pop up? Go right. Then forward. Stop and pop up? Go right, and then forward.

We must have done this for oh, 15 minutes or so. But guess what? I won! We then proceeded to walk calmly, and coolly, around the arena for as long as I wanted and for as long as I asked for. I went back to the gate, ‘tempted’ him to misbehave there a few times and he was fine. Darn this habit though, it is annoying!

Still feeling a tad put-out and grouchy about other situations, but I didn’t have time to linger/dwell on that too much as I had a TRACK RACE last night to focus on!! The series we do is called the Christie-Phoenix Victoria Run Series and they offer four track races for elites and community-level ‘all comers’ for me, the slow poke! 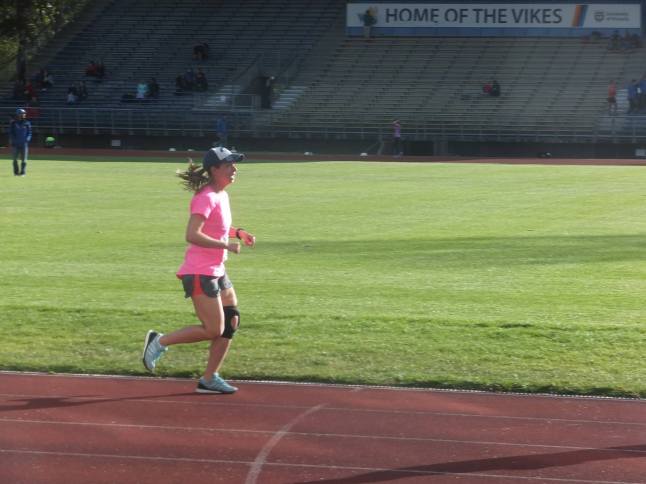 That’s right, back on track!

It was insanely windy, so much so that when I stepped out of my office building a gust of wind blew my sunglasses off my face and my earbuds out of my ears. WTF? It was horrible. I called my husband to pick me up, because I didn’t want to be literally fighting my way home for 40++ minutes (gag) getting blown around.

So yeah, the track meet…

Was insanely windy. It was ok on the long side, but coming up to the finish line and around the corner from the finish was so bad, it felt like I was running in slo-mo. The wind threatened to blow my hat off, etc.

I enjoyed running the 800m as much as one can enjoy a good lung-bursting run, and in the 3,000m was dismayed to see my times stalling and dropping. Apparently, me, a girl who has run a descent 10k in the 4:30s now cannot even sustain that for 3k? WHAT IS GOING ON?

Anyways, my decent into pure mediocrity continues (yes, I know that thing about feeling sorry oneself, hahaha) but I enjoyed my track efforts last night, and I am looking forward to challenging the track again next week! The only thing I can really do without is the incessant and really heinous sounding coughing I get after racing. I cough and cough this awful chest-rattling cough alllllll night after running.

And it’s confirmed that I do not have asthma, so what gives?