Had a pretty good riding week last week, despite it actually being kind of a washout, as far as real ‘riding work’ …We had to ride in the outdoor, because the indoor was being scraped and new footing added, so it was for a good cause! We all worked to rake down the new footing on Tuesday, and it was such good footing that by Thursday it was mostly ok to jump in! I didn’t think it would be, so I went to cancel my jump lesson- but happily we were able to keep it. 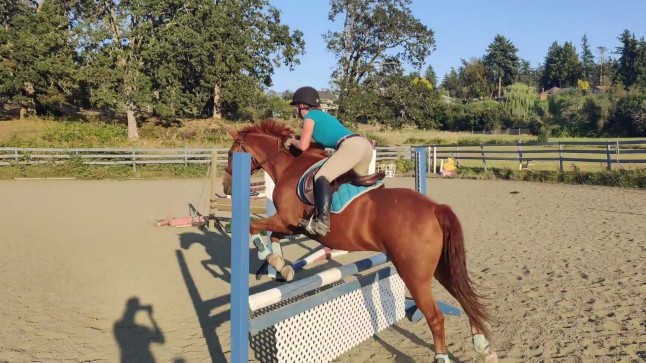 I do miss jumping outdoors…

There were quite a few fireworks though, yiiikes. Oats is really good about that, but they were LOUD and going off right above his head. He was a little wigged out! Good for my lesson but up at the barn it was just so close and so loud. Can’t blame the little guy!

Thursday was also the first day that week we were cantering/jumping, ha. I don’t normally do that in the outdoor because the footing is just too deep for Oats and he struggles. I really don’t want him to get a tendon strain or something struggling in deep footing at this point. When it settles, then sure we can ride out there, and in the winter when they get lights up, bonus!

Our jump lesson featured trot-in gymnastics, which are normally the bane of my existence. This week, it was good! Smoother than normal, just pretty darn good for both of us. Yes!!

I didn’t ride on Friday because we were packing up and heading out to a house rental my friend booked in Sooke for a group weekend. We had a blast!! 🙂 Now I feel totally exhausted and can’t keep my eyes open/fingers typing…So tired… Ugh.