Yes I was certainly leery about this one. A half-marathon? Even with the wimpy ‘half’ in front of it, it seemed quite intimidating. Because I am an excuse machine, I had a zillion excuses ready for why I shouldn’t, and only 1 reason for why I should. 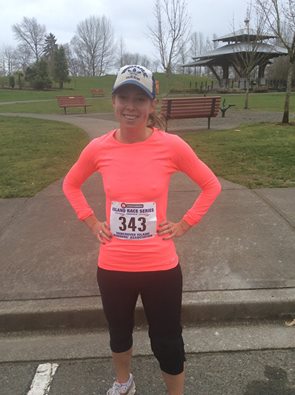 Soooo we did it! Sunday my husband and I trekked all the way to Courtenay for the race. We had already paid for it by signing up for the entire race series, so we figured- why not?

I was anxious. I let the race take up a TON of mental space and energy all week. My knees and everything felt horrible last week- creaky, achy, like I was having terrible growing pains. Clearly, this was a recipe for success (or failure, I figured!).

And how did the race go? Really well! We raced to the best of our ability, and I was happy with my performance. We even had a very strong finish, which made me super happy and kind of feel like puking at the end.

I smiled a lot for the volunteers and photographers (you guys are the best, you’re so dedicated!!) and I had a lot of people to look at and the scenery was all rural farms, so that was nice. The weather, thank GOD, held out mostly right until the end when another storm front blew in, and it started raining and getting windy, pretty much our last km/km and a half.

I felt for a few of the runners- I just wasn’t sure what their motivation was because this was a bit out of their range- the girl who was walk/running who could do a pretty good 10k but was clearly suffering at the halfway point, gasping so loudly during her run parts that I was worried! And then there was the girl in booty shorts, with blood on her thighs from the chafing. EEEEK! What made that seem like a good idea man? This is 21.1km…

There was music man, the guy with music blasting off his arm pretty loudly, and then there was beeping lady, who had some sort of tracker (heart monitor?) going BEEP BEEP BEEP BEEP like…every second. I was glad when we passed her! How she didn’t find that annoying is beyond me…I also saw one woman pulled off to the side, furiously stabbing at her iPod being like, ‘I hate this song!’ ‘I hate this one too!’??????? Seriously? Don’t let a song derail your run. At some point, it has to be internal, all you. Pulled over to mess with your tunes is a BAD IDEA.

We even saw a girl riding a grey pony down the street, and they were both watching the runners. The pony was older, and so cute. Totally unfazed by music man and the rest of us gasping and heaving our way down the street. Haha.

I learned that I am terrible at grabbing race drinks. Terrible. I splashed pink gatorade all over my face at the first attempt and was coughing and choking, and in my next attempt- even at a walk, still managed to splash water on my face and cough! Boo me! I also learned that roads are…slanted…and if I wanted any hope of saving my knees/legs, I had to really make an effort to run in the middle or on the soft shoulder. Hard lesson to learn but it made a huge difference in my knees.

We blasted (well, it felt like it but it was probably really slow) through the 100m sprint to the finish and we WERE DONE! Woo!! We finished it up with a great chili and some awesome snacks. Yum yum. The food, volunteers and everyone were so great, and really cheerful. Thanks to those guys, we had a lovely run, good food and a fabulous atmosphere!

And my time? Spectacularly mediocre: 2:05 haha. BUT my sprint was good- 5th in my age group! Woo hoo for a strong finish.

We then went and got a beer at Gladstone, which is a pretty cool little brewery and bonus points for literally being across the street from the race. Go us!